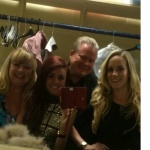 Dressing Room One – Me with Lydia Lucy, Peter Hewitt and Michelle Pentecost 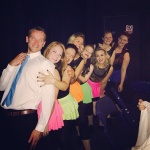 The Hewitt Old Girls – Lisa, Lauren, Sarah, Nicole, Melanie, Heather and Elena with the Host with the Most – Daniel!

It was a wonderful night. A warm, fuzzy night. A comfort-blanket night. A night of nostalgia, friendship, love, support, childhood bonds and immense talent. A night that said: ‘Those who have danced together stay together.’
It was One Night Only, the show put together to raise funds for life-prolonging medication for Samantha Lines, who is suffering from cancer and whose medication is no longer available on NHS. You may remember me writing about it in my blog of 27th April (Nostalgia). The Daughter and a group of her friends who danced together at Jean Hewitt’s got back together and put on a show that was absolutely amazing. I was so happy to be a part of it, co-hosting alongside my ex-pupil, Daniel Gower. We truly were the Tess and Bruce of Brentwood! 🙂
First of all, I want to say just how proud I am of all of them. The Daughter hasn’t danced for fourteen years and neither had some of the others, yet while watching The Hewitt Old Girls, you would never have known it. Their routines were absolutely great. I have often sung the praises of my dear friend Julie Barker in my blog – you all know she recently appeared in The Vagina Monologues, which I directed and we are working together on Into the Woods – and last night was no exception. Not only did Julie sing two numbers – The Arms of the Angel always gives me goose pimples but her version was brilliant – but the comp class from TipToe Stage School, under the guidance of her amazing daughter Elena-Beth Carter, performed two great numbers. Elena-Beth, who took the lead in Melabeau Productions’ Cinderella last Christmas and who first came to Hewitt’s in her pram!, also sang. Unbelievable and lovely to see what a confident performer she’s grown into, but I suppose it’s in the genes. Three other ex-Jean Hewitt pupils have their own schools and they provided performers. We all fell in love with Lauren Cooke’s ballet babes from Smooth Moves. What a bunch of little beauties! Jane Chinery’s girls from Sparkle Dance and Fitness really did sparkle with their two routines and Fay Morgan-Kern performed alongside her pupils with Pulse, her cheerleading troupe.

We were really spoilt by vocal performances, because as well as Julie and Elena, Gemma Richardson sang everyone’s all-time favourite, Over the Rainbow, and she sang it beautifully. And then, Lydia Lucy, who I also had the pleasure of working with in Cinderella, and who at Hewitt’s had been the little dolly that everyone wanted to hold, knocked it out of the ballpark with two great numbers as did Michelle Pentecost, who showed us just why she has recently appeared as Elphaba in Wicked in the West End and as Eva Peron in a tour of Evita.  Her performances of Defying Gravity and Don’t Cry For Me, Argentina were just…… Amazing!

And also appearing was Jean Hewitt’s son, Peter, an incredible musician who gave us a real magic moment with Summertime and Cavatina on the harmonica. Pete said afterwards just how proud his mum would have been of everyone, but it was because of the ethics and values that she nurtured and encouraged in the students at her own stage school that have stayed with them and brought them all together to raise money for their pal Samantha. The atmosphere back-stage was brilliant; everyone supported everyone else. There was no bickering, or back-stabbing or nastiness. Just a bunch of friends who had all got back together again for a great cause. So – the cast of One Night Only – I take my hat off to you and salute a truly lovely bunch of people.  And give yourselves a huge pat on the back.  You did yourselves, Samantha and Jean very proud.

And what was also nice was seeing other ex-Hewitt students who came along to watch and support the show and the parents of a lot of the performers again. We all became friends when their children came to my drama classes and when we all pulled together to get the pantos and shows up and running. I sincerely apologise to anyone I didn’t say hello to or spend time with but it was just so lovely to see so many old friends again, especially as the last time I had seen some of them had been at Jean Hewitt’s funeral.

So – please can we get together again soon? Pretty please?