Today is a day I’ve imagined all my life. Well, for most of it, at any rate; since I was seventeen and went on a school trip to Mallorca. We went by boat and train that first year, upgrading to a plane the following year. And as we went through the South of France and then along the Costa Brava towards Barcelona, the sight that most impressed me was the houses with their own pools. You see, in Dagenham at that time nobody had a pool. I’m not even sure anyone does now. No, you went over Valence or Leys if it was a hot summer’s day. But the sight of those turquoise patches dotted all along the coast stayed with me.
A year or so later when I was working in Mallorca I lived very near a mansion – and it was a mansion – that belonged to Dr Roca. He was a local doctor who attended any tourist who might get sick – usually too much alcohol causing diarrhoea or sunstroke and sunburn. I went past it every day and through the gates I could see the pool area and to me, it looked Olympic-sized. And I decided then that one day, I, too, would live in a house with a swimming-pool.
And now I do. 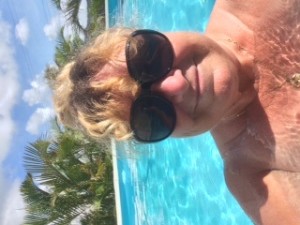 I am a great believer in visualisation. I’ve had a vision board for a number of years and, of course, my pool was on it. Yes, it’s taken a lifetime to happen, but it has happened!
Today, I had my first dip in my pool.
I got in with a huge grin on my face, which got wider and wider as I did some erratic aquarobics and then a few lengths. But as I turned onto my back and floated, looking up at the sky, tears rolled down my cheeks. And they were tears of joy.

Now, I need to add here, that I am not a rich woman. But when you make your mind up you want something and you focus on HAVING it – as opposed to NOT having it – the Universe shifts and delivers. The way the pool came about was a series of ‘coincidences’.

I’d been looking at above ground pools as I knew that a dug-in one would be out of my range completely. I didn’t want a plastic one, or an inflatable one because too much can go wrong with them. I’d seen a steel-wall above ground pool which I really liked, but at almost £1400, it, too, was a lot of money. Until the end of season sale.
Then, the pool was reduced to £500 and something. Looking better! Looking doable! 🙂
Of course, I had to add the cost of transportation to the price of the pool. I rang Virgin Cargo one Thursday last October and they quoted me £800.
Back to the drawing board! Or so I thought.
The following Sunday at a rehearsal of Into The Woods, one of our dancer’s mums, Dawn, came up to me with a flyer. “You go to the Caribbean a lot, don’t you? My husband transports there. Here, take this, in case you or anyone else you know ever needs him.”
I phoned Neil, Dawn’s husband, the following day, and it turned out he could transport the pool for me for a quarter of the price Virgin had quoted. He could even tell me which ship it would go on and when it would dock. I pointed out that I wouldn’t be back in Antigua until February and I didn’t want it to arrive before me. He then offered to keep it in his warehouse for me so that I didn’t lose the chance to buy it. What a fabulous man!! I cannot recommend him enough. If you every need his services, here’s the link: http://neilsworldwide.co.uk/contact/2236294

So, the pool arrived five days after I did. Clearing goods through Customs in Antigua can be a nightmare and sometimes a costly one, so most people go through an agent. It turned out that the Fella Who’s Far Away has a friend who gave me ‘mate’s rates’ and got it out in record time for less than £100 all-in. So – I’ve got my house with a pool, and if I eat beans on toast or bread and crackers every day to pay for it all, that’s nobody’s business but mine.

And that’s the story of the pool. And as I floated round shedding tears of joy, I looked towards the South and there was a beautiful rainbow. 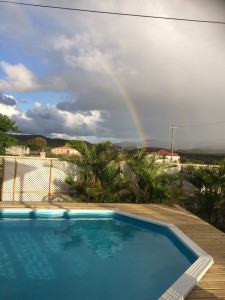 I love rainbows. Once, when I was in a bad place and things were going wrong, years ago, I called out to the Universe “Just give me a sign that everything’s going to be all right!” And a few seconds later a rainbow appeared. And they have continued to appear at significant moments throughout my life. And this afternoon, when I saw it, it was a truly magical moment.

Of course, I have to add that the decking and fencing and gates aren’t entirely finished. The carpenter, poor man, had to leave on the six o’clock flight tonight because his mother’s died in St Vincent. He was still hammering and sawing at two o’clock at which point I told him he should go. I get a little anxious when things aren’t finished; it’s a hangover from my Dad, who never finished any DIY completely, bless him! He always ran out of nails, or paint. There remains little to do here and I know that the carpenter will come and finish as soon as he’s back. The rainbow told me that.

And I tell the Universe daily, how grateful I am not just for my pool but for my life, which is pretty amazing.  I’ve known so very hard and difficult times, but I’ve got through them, always telling myself “This, too, shall pass.”  And, as someone wise once said, “If it’s not happy, it’s not the end.”

2 thoughts on “A Pool of Grateful Tears”