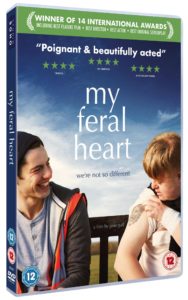 I had wanted to see it for such a long time but was thwarted at every turn, not helped of course by being abroad. And then, My Feral Heart came out on DVD. https://www.amazon.co.uk/Feral-Heart-DVD-Suzanna-Hamilton/dp/B076HBYY2B/ref=sr_1_1?s=dvd&ie=UTF8&qid=1509816497&sr=1-1&keywords=my+feral+heart
So, it went straight onto my Christmas List and as I was a very good girl, Father Christmas – aka the Brother – brought it for me.

And it turned out to be worth every second of the wait.

It’s a long time since I’ve enjoyed a film so much. I don’t want to give anything away (the Daughter calls me the Spoiler Queen) but I have to say that the tenderness of the film just blew me away. I was reaching for the tissues from about two minutes in. It’s outstanding on every level and I haven’t been moved by a film so much since Whistle Down the Wind, to be honest; it has the same kind of feel.

The director, Jane Gull, is a friend of mine, but that’s neither here nor there as I’ve always been in awe of her talent. She’s a gifted dancer, actor and choreographer and as this film shows, an incredible director and producer. The performances she coaxes from her lead actors, Stephen Brandon, Shana Swash and Will Rastall are just breathtaking and it’s easy to see why My Feral Heart has won awards worldwide, including, Best Direct, Best Actor, Best Original Screenplay and Best Feature Film.  It’s also Ourscreen’s No 1 film of all time and no wonder.

Did I mention Jane and lead actor Stephen Brandon are from Essex and much of the film was shot on location in God’s Own County? 😜

Seriously, though, I can’t recommend this film enough. If you only watch one DVD in 2018 make it this one.  You’ll bloody love it 😍.

2 thoughts on “I ❤️My Feral Heart”