I do hope you aren’t reading this over breakfast or while you’re having your tea. The apology for the subject matter goes without saying, but you know that I like sharing everything with you!

Last week my toilet suddenly became blocked. After flushing it would fill right up and then take about 3 hours for the water level to go back to normal. I had a go with the plunger, so did the Cleaning Lady. We both managed a temporary unblock that only lasted one flush. Then the Fella had a go, declaring that in his opinion – bearing in mind he’s not a plumber – the septic tank might need emptying. Given that it hasn’t been emptied in six years, I thought he might be right. He went into the yard and after much exertion he managed to get the lid off and, indeed, said tank was full. Anyway, he called a Plumber Friend who gave us the number of the Sewage Removal Man. He said he’d come bright and early the following morning (Saturday). By eleven o’clock – I’d been up with legs crossed since seven – I rang him and he said he was on his way. He turned up just before two (!). It’s Carnival so he’d obviously been out the previous night and who can blame him? And within half an hour he’d done the job and the tank was empty.

However, the loo was still blocked. So, I rang the Fella who rang the Plumber Friend who couldn’t come then as he was on a job but promised to come early the following morning (Sunday). Given the experience of Sewage Man the previous day, I didn’t set my alarm because I thought he’d come mid-afternoon, if he came at all, given that it was a Sunday at Carnival time.

At five past seven I was woken from my slumber by someone calling “Inside! Inside!” from the gate, which was locked. Plumber Friend! Hastily throwing on some clothes I let him in.
He inserted something called a snake into the loo several times, but it kept on filling to overflow. So, he went out into the yard and undid the lid on the sewage pipe. Loads of water gushed out and we heard the loo gurgle and empty through the open window. So, he knew the block was somewhere between there and the tank. He spent the next hour inserting the snake at various angles and from both ends until finally the pipe gave a huge shove and the sewage in the pipe fell into the tank. Ta daaaa!! He then used half a toilet roll, stuffing it into the loo and pulling the chain and it worked wonderfully well. I know have a fully-functioning, non-clogged-up loo!

It has been raining non-stop for two days as I write this. We are, of course, in hurricane/rainy season and apparently there are a couple of depressions coming across the Atlantic. We’ve had fairly high winds and some thunder and lightning, too. When the breeze is up it beautiful and cool but just a little while ago the sun came out for about five minutes and it was as hot and humid as being in a green-house. I haven’t been in the pool. It seems prudent to wait until there are no storms in the area, nah?
trim.57221617-0224-49BD-A75F-6439E046F778

Did you watch The Musketeers last night? OMG! What an episode! No spoilers from me, in case you haven’t seen it, but WOW! And I CANNOT believe that tomorrow night is the final episode EVER!!!!!!!! The BBC must be nuts!! I, along with a million other people, tweeted my displeasure at this and Ryan Gage (aka) King Louis favourited it. Imagine that! Tweeter by Royal Approval. 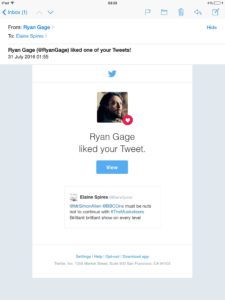 I just hope it has a happy ending. And that Porthos gets a girl, too. I love all of them. The actors have all been superb, including the wonderful Peter Capaldi who was Richlieu in Series One; not one duff performance from any of them. And the final episodes have been excellently directed by the talented Sue Tully. Musketeers, I shall miss you more than words can say.