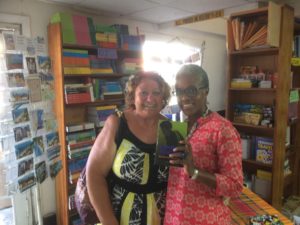 With the wonderful Brenda Lee Brown at London Rocks book-signing

Today I am wearing my Book Reviewer’s hat. And I am delighted the book I am reviewing is London Rocks by Brenda Lee Brown. It is the story of Dante Brookes, a young man growing up in the London of the late Seventies/early Eighties. Sound systems ruled the flourishing party scene for young Black-British youths of Caribbean heritage.

Our hero deals with a lot, including the death of someone close, constant stop-and-search and teenage fatherhood. He isn’t always 100% likeable…and yet… I liked him.

BLB brings Dante’s world alive. She writes convincingly, envoking all our senses in her descriptions effectively creating Dante’s mother’s kitchen with its mouth-watering aromas of Caribbean dishes and hot hair and oil, the dark, weed-smelling basements Dante frequents with a never-ending presence of Beanies. Now here I have to say I always thought a Beanie was a hat 🤦🏼‍♀️. It is, Dear Reader, a groupie!

And she writes in the present tense, which gives the novel pace and vibrancy.

Dante does have a couple of strokes of amazingly good luck, which turn his life around, teaching him that the pen and the mic are mightier than the sword, but the book never strays into the realms of the unbelievable.

My one criticism? I wanted more; I wanted – hoped – things would turn out for him. So I am keeping my fingers crossed for a second book.

Brenda Lee Brown was born in London but now lives in Antigua, her parents’ birthplace, where she has established Just Write creative writing workshops. She holds an MA in Writing from Sheffield Hallam University. Her work has appeared in a number of anthologies in USA, UK and Canada and online.

You can read her blog: handbagsandchocolate.wordpress

And you can buy London Rocks here: http://www.hansibpublications.com/London-Rocks