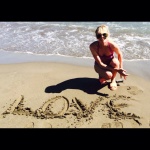 Today we have such a special treat because our Hot Holidays! Guest is East London writer and actress ANNIE BURKIN! And she joins us on such a special day, too (see below).

Annie decided to reignite her passion for acting back in 2005 where she enrolled at the Anna Scher Theatre School in Islington. Here she learnt drama through improvisation and also was given the opportunity to write, perform and direct a series of 20-minute plays over a few years resulting in her being awarded the Best Actress and Best Play categories in AST Festivals several times.

Annie’s theatre work includes Where’s Norman Beaton Gone (Rich Mix), A Balcony in Verona (The Cockpit) and 3 plays for the Metropolitan Police which she also wrote and directed. Her film credits include Zebra Crossing, Cornerhart and most recently playing the lead in a new British thriller called Blood and Carpet, which I have been lucky enough to see and she is truly amazing in it.

In recent months Annie has written a feature length play called Selfie Rules and working alongside her writing mentors Rikki Beadle Blair and John Russell Gordon it is now at the stage of a rehearsed reading to commence at the Theatre Royal Stratford East as part of the Angelic Tales season on Monday 8th June. That’s tonight! It’s Sex and the City comes to Essex. A comedy in modern day times where Facebook is the bible and online dating is a must!!

Her first feature film script has also recently been completed with the possibility of it getting to a production stage in late 2015.

ES: Annie, where did you spend your last holiday?

AB: My last holiday was literally last week where I spent a 7days in Marbella with some friends and luckily one of them has a villa out there so when I was invited to go and chill out for the week I jumped at the chance.

ES: I don’t blame you, who wouldn’t? What’s your favourite type of holiday!

AB: My favourite type of holiday is a beach one but also if the place has some history attached a bit of sight seeing and exploring interests me too. My least favourite is camping, I hate creepy crawlies.

ES: What was your best ever holiday?

AB: That has to be when I went to Switzerland. I went to a beautiful part called Interlaken. It’s so memorable because I took this amazing/terrifying ride over the mountains via 2 cable cars to get to the rotating restaurant at the top of the mountain, which had been featured in a James Bond film. The views were mind blowing and it was the best Sunday dinner ever!

ES: Scary but worth it. And your worst holiday? Any disasters?

AB: I’ve been lucky so far, no disasters as such just the usual arriving into the sun with a rotten cold from the flight and feeling rubbish for a couple of days.

ES: Tell us somewhere you would like to visit?

AB: A place I long to visit is Auschwitz. I think the experience of visiting there would be very tough and heartbreaking but to go there in person rather than just watch the documentaries would be so real and in your face and heart and that would be unforgettable.

ES: Who do you like to travel with most?

AB: My best travelling companions are my friends. I’m very fortunate in the fact I have all types of pals; ones to party hard with, ones to relax with and the inbetweeners.

ES: Ever had a holiday romance? Details, please!

AB: Holiday romances…too many to discuss. I’d have to write a book and give you a run for your money, Elaine! I blame them all on the sun…and the vodka.
ES: Well, I would certainly buy it! If there were no time or distance impediments, how would you spend your dream travel 24-hours?

AB: In 24 hours I would shoot over to Las Vegas and take in the headline show, then travel to San Franscisco to visit Alcatraz. Zoom across to Egypt to view the Pyramids and fast food outlets. Stop over in Dublin for a few swift halves of Guinness and see my beautiful Irish family and then round it off with a cream tea in Cornwall.

ES: Sounds fabulous! And finally, Annie, what advice would you give travellers?

AB: I have the best advice. Ladies, trust me, you only need 2 pairs of going out shoes and 2 pairs of sandals. Please don’t be like me taking 6 pairs or like my friend last week taking 11!!! Also when visiting other countries try to learn a tiny bit more than ‘hello’ and ‘thank you’. It’s respectful and you might just impress yourself.

ES: Thank you so much, Annie. And break a leg tonight!