One of the most interesting things I’ve noticed while doing my research for The Banjo (my next novel, due out soon!) is how nobody in the 50s and 60s dressed casually. In every single photo I’ve looked at the men wore collars and ties and the women hats and gloves, which probably matched their handbags and shoes, but I can’t prove it as the photos are in black and white!
Even the children are dressed in smart clothes; boys playing football and go-carting in the streets wear jackets or pullovers and ties. ‘Best’ clothes seemed to consist of school blazers. Recently, The Sister came across a photo of the two of us out in the street. She’s holding her bike and we are both dressed in our lovely coats – mine blue, if I remember correctly, and hers red to match the cycle. 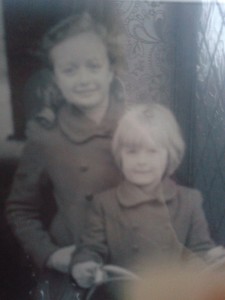 My coat was blue and hers was red.

My mum was always a very smart woman. When I was first working in Spain she had a new outfit to wear for travelling to see me without fail. Indeed, I remember women stepping off the plane in Ibiza in chic trouser-suits or sundress and jacket suits. Men arrived in lightweight slacks with matching jackets. Everyone looked smart. The 70s might be the Decade That Taste Forgot, but people dressed up, women had their hair done – Mum went to Maison Harvey every Saturday – and their nails painted.
I liked those times. Unfortunately, it all started changing in the 80s when Jane Fonda told us we had to “feel the burn” and apparently, we could only do that in casual clothes. Tracksuits, which until then had been worn by athletes on the track, became the norm, followed in the late 80s by that nylon aberration, the shell-suit. 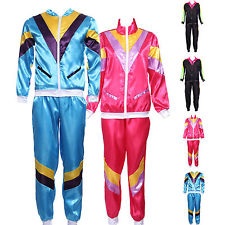 How could we have worn these?

In a variety and combination of colours – many clashing – it was the clothing equivalent of the Martini – Anytime, anyplace, anywhere. And it was hideous. Jimmy Savile was never without his, which sort of says it all. And travel stopped being something you dressed up for and became something you dressed down for. You wore your shell suit and trainers to Luton Airport and beyond.
And since then it’s been downhill all the way. Last week two head teachers in separate schools found it necessary to send letters home asking parents not to come to the school wearing their pyjamas. I kid you not!
Of course, in this crazy I know my human rights and you ain’t gonna do nothing to stop me world that we live in, one mother – I use the term loosely – deliberately turned up at the school the following morning wearing red pyjamas with Ugg-type slippers and posed proudly for the national press, while another removed her two children. I’m not quite sure what that proved. Anyone? How can someone be so lacking in self-pride and self-respect?
As my old Nan used to say, “Whatever happened to shame?” And I know what my Mum would have said: “Lazy cow!”