Today’s Hot Holidays! guest is Iain King, whose book the Last Prophecy of Rome is out today! 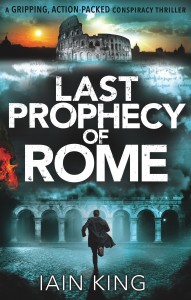 It is a gripping action-packed conspiracy thriller (Myles Munro action thriller series Book 1) featuring an ancient empire; a terrifying threat to the World’s Superpower; and the only man who can stop it. Sounds good? Then listen to the rest…..

ROME: Maverick military historian Myles Munro is on holiday with girlfriend and journalist Helen Bridle. He’s convinced a bomb is about to be detonated at the American Embassy.

NEW YORK: A delivery van hurtling through Wall Street, blows up, showering the sky with a chilling message: America is about to be brought down like the Roman Empire.

Juma, an African warlord, set free by the Arab Spring, plans to make it happen.

When a US Senator is taken hostage, a chilling chain of events begins, and Myles finds himself caught in a race against time to stop Juma. But, he’s not prepared for the shocking truth that the woman he once loved, Juma’s wife, Placidia, has now become a terrorist.

I can’t wait to start reading it! And you can download it here – UK: http://amzn.to/1jAc5cI

ES: Iain, thank you so much for taking the time to talk to us on such an exciting day! Let’s get started by you telling us where you spent your last holiday and why you chose to go there.

IK: We went to the wonderful North Bradbury working farm in Devon – it gave my kids, Verity and Myles, the chance to feed the animals and be ‘farmers’ for the week.

IL: My favourite is either a family holiday, or an adventure holiday somewhere remote and unpredictable.

ES: And your least?
IK: My least favourite is being caged in a resort or chained to a ‘timetable of activities’.

ES: Where did you spend your best ever holiday and what made it so memorable?

IK: I recently travelled to South Sudan, into the jungle near the border with the Central African Republic. Meeting people who farmed small clearings in the rainforest, most of whom had never met a European before, was humbling and exciting. They were the nicest people I’ve ever met.

ES: Have you ever had any holiday or travel disasters?

IK: Yes: getting serious sunburn in Morocco when I was 18; then, 25 years later, allowing my son, aged 8, to get even worse sunburn in the USA. I’ve also had serious stomach problems in several places (you know what I’m saying…)

ES: Unfortunately, I do, Iain. On both accounts. Sunburn is nasty. Tell us about a place you long to visit and the reasons why.

IK: Either Northern Norway or Antarctica. There’s something magical about the desolate landscapes, and the isolation.

ES: Who’s your favourite travelling companion(s) or do you prefer your own company?

IK: I love travelling with local people. You learn so much more from the people than the place itself.

IK: I met my wife when I was working for the United Nations in Kosovo. Kosovo wasn’t exactly a holiday, but we did manage to take weekend breaks from there to Greece, Montenegro and Croatia.

ES: How would you spend your dream twenty-four hours if you could travel to multiple, worldwide destinations with no travel restrictions?

IK: I’d spend it meeting villagers in North Korea, and trying to make them laugh.

ES: What tip or piece of advice would you give to holidaymakers and/or travellers?

IK: Don’t try to make memories. If you enjoy the moment, the memories will make themselves.

Thanks, so much, Iain. Best of luck with the Last Prophecy of Rome! 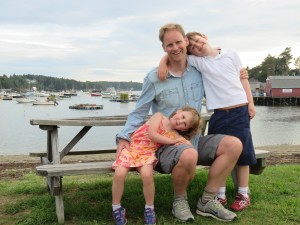 If you want to find out more about Iain or contact him, here is where you can:-