Last week was a busy one and an enjoyably busy one at that.

The week started off with a dose of Shakespeare in the form of The Winter’s Tale at the pictures.  I went along to see the film of the Kenneth Branagh Theatre live performance – http://www.branaghtheatre.com/the-winters-tale/ – with the man himself taking the role of Leontes and Dame Judi as Paulina, which is part of his Plays at the Garrick season. And very enjoyable it was, too. It took a little while to start, much to my chagrin, having rushed and huffed and puffed to get there. How is Romford so crowded at 3.15 on a Sunday afternoon? I couldn’t find a parking space and then when I did, I found myself weaving in and out of a very crowded Brewery and then behind a family who were incapable of going in to watch the film without a wheelie bin of popcorn, three hot dogs, four litres of Coke and four Magnums.
I finally took my seat twelve minutes after the start time, only to have to suffer another ten minutes of adverts and trailers, then a six-minute arial view of the Garrick Theatre audience followed by Kenneth’s fifteen minute monologue before it actually started! Still, as I say, very good and worth the wait.

And at the closing end of the week, i.e. Saturday, I went along with my dear old friend M to see David Tennant *swoons* in the title role of Richard II at the Barbican. It was absolutely bloody fantastic! First time I’d seen the play and first time I’d seen David in the flesh and neither disappointed. Set in 1399, Richard wore such beautiful clothes. His first two outfits – long brocade ‘dress-coats’ would look fantastic at a posh wedding. And I do like him with long hair! 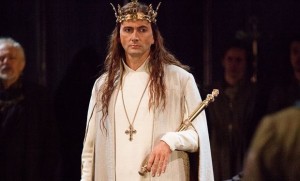 Seriously, though, he is a fine, fine actor and the rest of the cast couldn’t be faulted, either. The Barbican is a fabulous theatre as every seat has a full-view of the stage and I am always fascinated by the closing doors at the end of each row. (OK – I’m a bit of a pleb, I need to get out more!) The only thing I don’t like about it is that it’s like doing a step-aerobics class. Loos down two flights of stairs, bar up one flight, I didn’t know where I was or where I was going. There aren’t many shows left, but if you get the chance go and see it. You won’t be sorry! http://www.barbican.org.uk/theatre/event-detail.asp?ID=18156

And after I had yet another first – dinner in Brick Lane! Given that I was born just over a mile away from Brick Lane, in Commercial Road, and have spent the last thirty years in East London/Essex, it seems unbelievable that I’ve never had a curry in Brick Lane. But I haven’t! Or rather I hadn’t until after the theatre on Saturday. We trudged through the pouring rain from Aldgate East Station but it was really worth it as the meal we had at Sheba – 136 Brick Lane – was more than delicious! http://www.shebabricklane.com

And right in the middle of the week, the Sister and I were in the audience of Loose Women.

Loose Women is something that I usually have one eye on as I take my lunch break. Whenever I’m writing I have to have background noise and so usually I start off with BBC Breakfast and then switch to Ken Bruce on Radio Two. I do like Ken; there’s something about him! But when he finishes at twelve Jeremy Vine comes on. Now, I have to say that since getting to know him on Strictly, I actually think Jeremy is a decent person, in fact, I grew rather fond of him on Saturday nights and was sorry to see him go. But, I don’t much take to his radio persona. Do you think it’s the name? Jeremy? I mean, if you think of famous ones – Kyle, Clarkson, Corbyn – you see what I mean? Most unattractive on every level. So once he starts I flip over to the last bit of This Morning (I’m growing rather fond of Rylan, too!) and then watch LW.

I sometimes find myself shouting at the TV as for me, the Loose Women fall into two categories; they are either lovely Brucellas or horrid Jemimas. On Wednesday there were three Brucellas on the panel – Ruth, Coleen (who’s only become a Brucella recently; didn’t used to like her but now I do) and Sherrie. And then there was Vicky Pattison. Dear me! A Jemima to the nth degree. She spoilt the whole session for me, if I’m honest. My favourite LW has to be Janet S-P, who hasn’t been on since before Christmas. I do hope that she’s coming back. And Linda Robson, Saira Kahn and Jane Moore are also Brucellas, while Nadia Sawahla and Kay Adams are Jemimas with a capital J.

And………..I’ve actually spent two whole days working on The Banjo. Yes! I’ve got my writing mojo back and I am on a roll!! Hoo-bloody-ray!

STOP PRESS!!
I’ve just heard that they are going to draft in men panellists on Fridays from now on. Peter Andre, Paddy McGinty and Piers Morgan’s names were mentioned. Like we don’t see them enough on TV! Bad move, Loose Women! If you want to ring in a few changes, why not have an ‘ordinary’ woman on the panel once a week. Someone who isn’t famous but who would make an interesting panellist. Like me!