Yes, what a thing! The Daughter stopped in her tracks on Friday as she was whizzing through Waterloo Station at her usual pace when she saw the Ghost Soldiers – each one representing a soldier who actually died at the Battle of the Somme, 1st July 1916.  She was so moved, she took a photo of them. 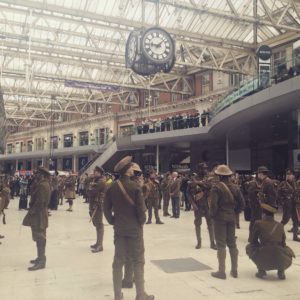 And it actually went viral – more than 2.1million views. As she said herself #anythingKimcando These are the kind of pictures that should “break” the internet, in my opinion. Not Kim Kardashian’s bum. Which is actually smaller than mine, by the way!

Well, the observant among you will have already noted that the W-word (writing) doesn’t appear anywhere in the title of this post. The reason is, there’s not much of it going on. Look, it’s Wimbledon Fortnight, okay? With the five hour time difference, I’m watching it as soon as my eyes are open in the morning, right through to late afternoon. For the first couple of days I tried doing both, watching and writing, switching back and forth from the lawns of SW19 to the Poseidon Restaurant on Adriatic Deck of the Viking Queen as she sails from Amsterdam to Bergen. Not a good idea! What’s wrong with writing late afternoon? I hear you ask. Well, nothing, except that I’m not usually in the mood then and I have to do my erratic aquarobics session before having a sundowner and getting dinner ready.

So, being a realistic sort, I decided to give myself time off and write today – Middle Sunday. But, then the rain came down. And so much of it and so often that they had to play today. And what matches they were! Tsonga beating Isner – the King of Long Matches – 19-17 in the fifth; Kyrios beating Lopez (boo boo!); all very exciting! So writing has been suspended until tomorrow week, by which time I hope Andy Murray will have lifted the trophy. And if it’s not him, anyone but Federer!

On Friday evening I found myself giving an impromptu Spanish lesson to two local boys of about eight or nine. I’d gone to get a takeaway from a place that advertises on Facebook. The food always looks really yummy and so I thought I’d give it a try. Bad move! Not only was it twice the price I usually pay to Jocelyn, the wonderful lady who has a little grill near me on Fridays and Saturdays (she’s in Canada seeing her sister at the moment) but it wasn’t a patch on hers. And I was kept waiting for fifty minutes. Now I am aware that fast doesn’t mean instant, but when they only serve five or six things, how can it take so long? Seven or eight people who came in after me were served before me, until finally I was called forward. But, in the interim, two of the village boys who were hanging around saw that I was lighter skinned than them and assumed I was Hispanic and started asking me the Spanish word for various things. They were quick learners and made me laugh, thus helping to pass the waiting time. As I left they both called out “Adios!” I said it back to them and waved. With the dismal food experience it certainly won’t be “Hasta pronto”!

To make it up to myself – I went for late lunch to Dennis’s at Ffryes’s Beach yesterday. As you can see – the beach was really crowded. Not! 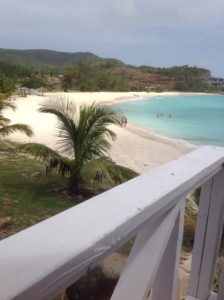 And staying on the subject of food – we’re in the middle of mango season!! #heavenonearth I just love them and they are very good for you, apparently. Certainly, they’re anti-inflammatory, which helps against my arthritis. The sellers are everywhere and they’re so cheap. I bought a whole bagful yesterday for $10EC. 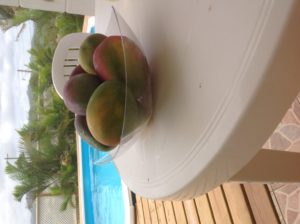 Honestly, how many mangoes can one woman eat? Answer – a lot!

And 2016 took another great talent from us. I was stunned to hear of the death of Caroline Ahern yesterday. Apparently she’d been ill for a long time, but I didn’t know. Hilariously funny as both a writer and an actress, she leaves yet another huge gap in the world and only 52. No age.

I wish you all a peaceful week.