I was hoping – convinced rather – that this post would be full of joy and happiness, telling you how the sale of Avocado Cottage was going through and that shortly I’d be grabbing the cash and moving onto the next stage of my life’s journey. 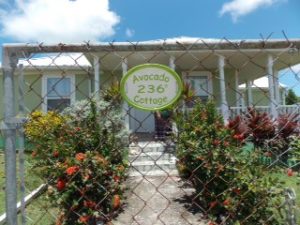 The buyers have disappeared.  Yes, quite literally.  Here’s what happened:  Angele, the buyer, an Antiguan who lives in Canada, said they’d be in Antigua in June to go ahead with the sale.  I asked if she could be sending details so that my solicitor could be getting on with the paperwork but she said she didn’t want to do anything long-distance, which I understand.  So, the months rolled by and on 31st May I emailed her to ask when she would be arriving.  She replied immediately saying her son was arriving on Saturday 3rd and would be in touch “as soon as he gets in”.  So, 3rd June came and went and so did 4th and 5th and I heard nothing from him.  So I emailed to check he’d arrived safely.  I got another email back immediately stating “They don’t have wifi/internet set up as yet.  As soon as they have it he will be in touch.”

Now, I found that very strange.  I emailed again giving both my phone numbers – which they already had – and asked that he call me.  Today’s 15th June and I’m still waiting.  So – I think the signs are indicating that they’re no longer interested, wouldn’t you say?  I’m really mad, because whenever it was in the last three months that they changed their minds, it would have taken a minute to email me and tell me.  I’m told by a very good friend who’s lived here for 30 years that it’s a cultural thing; people don’t like to say no to others so they just leave everything hanging.   Cultural Thing or not – it’s bloody bad manners and crazy behaviour.  Ggrrrrr!!!

BUT – there’s no point in crying over spilt milk so Plan B has been scuttled together.  And that basically is – drop the price a bit and really put it out there, which I’ve been doing with the help of a couple of friends and also put it up for a year-long rental.  I really didn’t want to do that after the fiasco of the last tenant who gave me a string of excuses for not paying the rent followed by one bouncing cheque after the other – I just want to sell! – But, at the moment it would be a solution to enable me to leave Antigua and bring  in a little bit of much needed cash.  I keep remembering my beautiful double rainbow of last week and that’s helping me to stay positive about it.  The Universe knows what I want; it just needs to hurry itself up a bit and bring me a buyer.

On a positive, writer’s note – the screenplay for the short is finished – and it’s fab!  I’m so pleased with it.  And I’ve spent some time working on my cosy Mystery.  Practice Positivity!  As the wonderful Anna Scher always says. 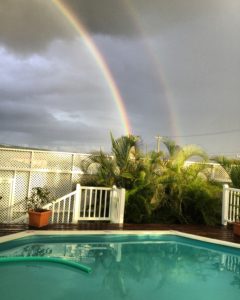