At a time when Pensioners are fast becoming the nation’s scapegoats it was encouraging to see 71-year-old Harry Rednapp voted King of the Jungle on I’m A Celebrity Get Me Out Of Here.  I have to say I like Harry even though he did morph into Miserable Old Git for a while during the run.  He’s a good old East London Boy!  I did wonder, though, how Sandra had put up with him for so long!  They met in The Two Puddings in Stratford in 1964 and married in St Margaret’s Church Barking in the summer of 1967.  Many have waxed lyrical about their romance and the longevity of their union.  Not me, though.  Apparently she’s spent the last fifty-one years running around after him – when he wasn’t running her over, that is!  He says she does everything for him and that he has few friends as she’s the only person he wants to be with.  While that might sound wonderful it would have me running a mile!

And before you write in and call me cynical – I just want to point out that we’re all different.  Marriage isn’t for everyone and neither is the claustrophobia of such a close relationship.  But that aside, I was genuinely happy for him and to see him crowned the winner.

Over on Twitter – what an awful place! – Pensioners are being scapegoated by idiots like Owen Jones for every ill that may befall the country.  They’re living too long, a drain on NHS, a drain on Social Services, – or, if they decide to continue working, taking jobs from young people.  Re Brexit, they didn’t know what they were voting for, ignorant, xenophobic, racist, selfish etc etc.  I am sick of pointing out that not all Baby Boomers live on fat pensions in £800,000 houses.  Many of us are living hand-to-mouth; many of us continue working because we can’t afford to retire.

Yesterday I had a lovely time with some of my very large family.  It was especially good to see three wonderful people – Auntie Audrey (88), Uncle Stan(90) and Uncle Tony (84). 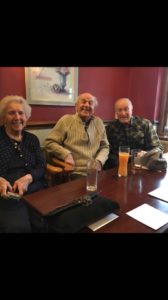 They all live independently and certainly aren’t a drain on NHS or Social Services.  They worked and contributed all their lives and between them had eleven children who have also done the same. They still have so much to offer everyone around them, not least of all the younger generations, with their wisdom, experience and they are the glue that holds our huge family together.

So let’s continue to celebrate people like them and Harry Redknapp and stop scapegoating Pensioners!!

We’ve had some more good news about Only the Lonely.  It was filmed in Walthamstow and therefore was a natural choice for inclusion in Into the Forest, Waltham Forest’s launch event for their Year of Culture.  We are so excited to be a part of this!  Into the Forest will be held in the grounds of the William Morris House, Walthamstow, 11-13th January at 7pm.  For those who have been asking when and where they can see the film, well now you know! Two PuddingsI really hope to see you there!