I was thrilled and honoured to meet the charismatic, talented Martina Cole at a book-signing last weekend.  She was so lovely, chatty and helpful.  I asked her about an interview and she said to give my card to her son who would contact me, which I did, so WATCH THIS SPACE! 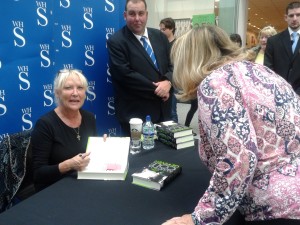 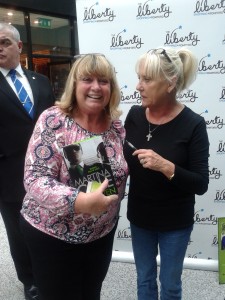 Me and Martina – having a chat.

Like me, Martina is a Dagenham girl, and one who’s never forgotten her roots.  I really look forward to the interview and hearing what she has to say, especially as I’m deeply emerged in Dagenham back in the 50s at the moment with writing The Banjo.  And as you can see from the photos – don’t get me wrong I was grateful she helped – but the security lady wasn’t the best photographer in the world.  She didn’t get the nice shot where Martina was looking at the camera.  Still, meeting her was great and I’m keeping my fingers crossed for the interview!

It’s been a funny old time.  I missed out on two acting jobs in the last two weeks – one, as Mrs Christmas in a Christmas theme park, I really didn’t care about – but was very disappointed not to have got the other one after reaching final recall.  It was for the English Theatre of Hamburg; a comedy role for 12 weeks that really appealed.  Never mind!  It wasn’t meant to be.  That’s showbiz – onwards and upwards and ‘break a leg’ to the actress who got it!

I had a fab and long-overdue catch-up with my lovely friend V, one of my oldest and closest over a three and a half-hour lunch.  Great to see her; she is one of the few people I can really open up to and be honest with and just chatting to her resulted in a mood up-lift and a return of my positive attitude.  Thanks, V!!

Another disappointment has been not getting Single All the Way accepted for promotion by BookBub.  I think one of the reasons is that I haven’t got all that many Amazon reviews.  Any tips on how to raise your Amazon profile greatly received!  Three months ago I promoted Singles’ Holiday on Amazon – 600 people took advantage of that.  TWO have given a review.  TWO OUT OF SIX HUNDRED.  It takes a minute to write a quick review and it means a lot to a writer.  I’m going to keep on applying to BookBub – nothing venture and all that – but if it’s true that they go by Amazon review numbers it’ll be 2035 before they accept one of my books 🙁

Today is the Daughter’s birthday!  Happy birthday, my darling girl!!  We are having a family lunch at the Chiltern Firehouse, which I’m very much looking forward to.  I’ve just been looking on Facebook and some of her friends have written truly warming, lovely birthday tributes to her.  I’ve always said, that the best compliment I could ever pay her is to say that I love her because I’m her mum, but I really LIKE her because she’s a lovely person.  And I take full credit for that! 🙂