Wednesday is usually Rubbish TV Night of the Week for me. It’s the night when I watch another episode of The Wire. I only came to The Wire quite recently and am halfway through Series 3 at the moment (or Season 3 as the Americans call it.) So it has been with great joy that I’ve started watching Cuffs on BBC1 at 8pm on Wednesdays. It’s like The Bill, but brought up to date and set in Brighton. It’s a bit PC – Ha Ha! Didn’t intend that pun but it’s actually quite funny. I crack myself up sometimes -and stereotypical. I mean, we’ve got the lesbian PC, the muslim woman PC complete with headscarf, the gay rooky and the DI who went to public school is into S&M. But apart from that, it’s also got the wonderful Ashley Walters and it’s a good hour’s worth of escapism, which is what I ask from TV. So, once it was over, and not wanting to watch The Awful Apprentice, I flicked over to ITV to find the Nation was in the middle of deciding on its favourite Beatles’ song. OMG! Trip down Memory Lane or what? I immediately went to ITV+1 so that I could watch it from the beginning.

I took absolute delight in two hours of beautiful nostalgia, watching the four young men around whom my whole life had evolved for quite a few years. More recently, with the eyes of an adult, I’ve quite gone off them. Paul’s pathetic performance at either the Queen’s Jubilee or the Olympics (can’t remember which, all these occasions sort of blend into one) when he couldn’t sing in tune to Hey Jude and seemed to forget the words didn’t help. And what to teenage me appeared to be John’s cutting-edge wit, I now just see as woeful attention-seeking. Sometimes I don’t think he was a very nice person.

But watching the footage of them performing, listening to the songs, and seeing Gorgeous George Harrison again was like wallowing in the warmth and familiarity of your old comfort-blanket that you hadn’t realised you’d missed until you felt it again. In her autobiography, Wonderful Today, Patty Boyd, his first wife, describes George as ‘the most beautiful young man I’d ever seen’. She gets no argument from me! I was soooooo in love with him. And just recently I came across the personalised autographed photo he sent me. Swoon!! 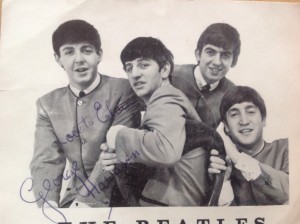 Treasured proof of George’s love for me!

I was reminded on Facebook by my school chum Maggie that I’d gone down with chicken pox just a day or so after meeting them at a Fan Club Convention and was terrified I might go down in history as the Infamous Girl Who Gave The Beatles Chicken Pox.  But I didn’t!  The Nation’s Favourite Beatles’ Song turned out to be Hey Jude.  You can always rely on the British Public to get it wrong, can’t you?  It was like Strictly all over again.  Surely it has to be Here, There and Everywhere, or, The Long and Winding Road, or Girl, or And I Love Her? Actually, no.  The Best Ever Beatles Song Without Question isn’t a Lennon/McCartney composition at all.  It’s Something.  Written by George for Patty.  The most beautiful, moving, haunting love song of all time.  What a woman Patty must have been; three of the world’s best love songs dedicated to her (Wonderful Tonight and Layla by Eric Clapton being the other two).

Talking of something being moving – I embarrassed myself at the Broomfield Hospital yesterday.  On my previous visit to see my consultant, two months ago, I had to wait over two and a half hours as she was ‘running late’.  So yesterday, I took my iPad with me to pass the time.  I was reading The Girls from SeeSaw Lane by Sandy Taylor on it, which, co-incidentally, like Cuffs, is set in Brighton.  Now, to be honest, I’d almost left it a couple of times but I decided to stick with it.  OMG!  I’m so glad I did.  An ‘alright’ book suddenly becomes amazing three-quarters of the way through.  And the last couple of chapters!!!  Well!! I sat in the waiting-room with tears rolling down my face.  And then, only fifteen minutes after my appointed time, my name was called.  It took me totally unawares.  And my consultant was quite startled to see me, eye-make up smudged across my cheeks.  ‘Would you like a moment?  A glass of water?’ she asked, concerned.  I explained that my book was really sad, which sounded a bit feeble really.  The truth was, it was more than sad.  It was tragic, it was poignant, and the end was beautifully written.  And, it was so close to events in my own life that it was exquisitely painful as memories and emotions came flooding back.  I’d thoroughly recommend it.  It’s out in paperback in early December.