I have just finished reading FLOWERS FOR THE DEAD by the bestselling author of psychological crime fiction, BARBARA COPPERTHWAITE. Her debut, INVISIBLE, went on sale last year and became an Amazon Top Ten best seller in the UK. FLOWERS FOR THE DEAD has been equally successful, charting as soon as it was released. It is a fabulous read! I cannot recommend it highly enough. Although it was scaring me witless, I just couldn’t put it down; Barbara is such a talented writer.

She was raised in Lincolnshire, beside the sea and in the countryside. There, she became a lover of both the written word and the great outdoors. A national journalist with twenty years’ experience in newspapers and magazines, her fascination with crime really began during a brief spell working in a men’s prison many years ago.

When not writing feverishly, she is often found hiding behind a camera, taking wildlife photographs.

Barbara now lives in Birmingham with her partner, and their dog, Scamp.

AND, she is our Hot Holidays! guest today! Yay!! 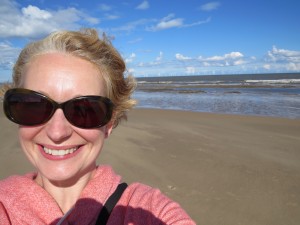 Barbara on the beach in Norfolk

ES: Where did you spend your last holiday and what made you choose it?
BC: We miss our dog, Scamp, too much to leave her behind for a holiday abroad, so Paul and I always holiday in the UK. I’ve always been the same though; once I went on holiday to Australia and missed my old dog, Buster SO MUCH. As soon as I landed, after a 24-hour flight, I jumped in my car and drove two hours to my mum’s house to get him. That was the last time I went abroad.
Our most recent holiday has been Norfolk, in a tiny place on the Broads called Reedham. We both love walking and nature, so this is the perfect location for us. The old windmill we stayed in was in the middle of nowhere and had a huge garden, which backed onto the water. I’d get up early to watch swallows swooping down over the mill pond in the front garden, almost crashing into one another. In the evening, we’d eat at the picnic table, and watch marsh harriers hunting, to be replaced with barn owls later at night. Ours days were taken up with walking for miles, exploring the great outdoors.

ES: It sounds so peaceful. What is you favourite type of holiday?
BC: I feel happiest walking, exploring local places, seeing historical sites. Paul and I both love learning the local history of anywhere we visit, seeing ancient monuments, learning new things. And I’m passionate about nature. Take me somewhere I can see wild things roam free, and I’ll have the biggest grin on my face!

ES: And your least favourite?
BC: As you can probably guess from my first answer, I’m not someone who could spend day after day on a sun lounger by the pool. I’m too restless to spend more than one day doing that.

ES: Tell us about your best ever holiday and just what made it so special.
BC: I was completely blown away when I had a holiday in the Yukon region of Canada a few years ago. It’s a gorgeous, vast, mountainous place, with a very sparse population. As a result, everyone is so friendly! Part of it is within the Arctic circle, so winters are harsh and long, and the summer’s brief but beautiful. I got to see a grizzly bear, wolves, moose, fly in a helicopter over a blue glacier… I’ll never forget trekking in some woodland and stopping to listen straining my ears to hear a car, train, or plane, but there was nothing but nature. Pure bliss.

ES: You are really selling it to us, Barbara; wild and wonderful. But have you ever had any holiday or travel disasters?
BC: Ha, I once got delayed for 30 hours whilst trying to get home from a holiday in Olu Deniz, Turkey. It was a nightmare. We’d got cheap flights, and the company (which no longer exists, unsurprisingly) weren’t even handing out food or drink for passengers with children. So I put my journalist hat on, as it were, and told the rep that if she didn’t start doing something to look after people, I’d be doing an article for a national newspaper. She tried to call my bluff, until she spotted my photographer friend and I organising the passengers for pictures and interviews, etc. Next thing we knew, we’d all be moved to a hotel!

ES: Good for you! Is there any special place you long to visit?
BC: It’s not a specific place, but I’d love to go somewhere to see blue whales and humpback whales. They are so vast and awe-inspiring, and to see them in the flesh would be an absolute dream come true.

ES: I think I may already know the answer to this, but who’s your favourite travelling companion(s) or do you prefer your own company?
BC: Paul, Scamp and I are always happiest together.

ES: Have you ever had a holiday romance? Details, please!
BC: Well, I grew up in that famous northern holiday resort of Skegness, in Lincolnshire, so I suppose I’ve been on the receiving end of a fair few holiday romances without having to even leave my hometown! My first kiss was with a holidaymaker on Skeggy beach. (ES: LOL!)
I still go back to Skegness as often as I can, because I have family there. I absolutely love walking on the beach, with its miles of golden sands, and the nature reserve of Gibraltor Point beside it. Not many people realise there is a site of world importance in Skegness, and I love it there. So my ultimate holiday romance, in a way, is with the resort where I grew up.

ES: Oh, that’s beautiful. How would you spend your dream 24 hours if you could go to multiple worldwide destinations with no travel or time restrictions?
BC: If Scamp could come with us, we’d whizz to Borneo to see the unique wildlife there, I’d also pop over to Iceland, Canada, and over to Australia to see some friends over there, and I’ve always fancied visiting Venice… In fact, if there are no limitations, I’d like to go everywhere! Perhaps Santa could arrange for me to borrow his sleigh so we can achieve this global trip.

ES: Well, that depends on whether or not you’ve been a good girl! What tips or advice would you give to travellers and holidaymakers?
BC: My best tip was given to me by someone who worked in Disney World, Florida. Apparently most people when entering parks automatically turn to their left. To avoid crowds, get there early in the morning, but also turn right, that way you’ll get to the rides before anyone else.
Also, be kind to cabin crew when you fly! It’s not a tip, but I spent a couple of months working as one on short haul flights, and have never worked so hard in my life. Something crazy seems to happen to people once they are flying: I once had someone ask me to speak to the captain about turning the engine down because it was too loud!

ES: Never underestimate people, eh? Barbara, thank you so much for taking the time to share your Hot Holidays! with us. Merry Christmas!

To find out more about the novels INVISIBLE and FLOWERS FOR THE DEAD go to www.facebook.com/AuthorBarbaraCopperthwaite or follow @BCopperthwait on Twitter.

To find out more about Barbara go to www.barbaracopperthwaite.com