Well, as Christmases go, it was awesome. Great. Brilliant. Magic. Sick. It was a Very Christmas!
And I can’t believe it’s all over after the weeks of preparation and looking forward to it. Although, I leave the tree up until 2nd or 3rd January and I burn candles all through the winter as I love candlelight, so it still seems very Christmassy in my little living-room.
Although I’ve spent most of my life in warm climates, surrounded by sunshine, the run-up to Christmas in UK is my favourite time of year. I enjoy the dark evenings and seeing all the lights and I love the socialising. No wild parties for me this year, but I so enjoyed all the pre-Christmas lunches and drinks I had with friends. And even though some of them have had a really rotten year – 2015 hasn’t been very kind to a lot of people – they were cheerful and we had a real laugh together.
For someone who isn’t religious I had a bit of a churchy time, too. I’ve already told you all about Santa Lucia in Stockholm, but I also went to the John Lewis Carol Concert at Westminster Cathedral. It was preceded by tapas at Goya in Pimlico, with the Daughter, the Sister and the Brother and a lovely evening we had. I can’t believe it was the first time I’d ever been inside Westminster Cathedral, though; it is such an imposing building. There were loads of people there yet somehow I managed to get the only rogue programme. Two double pages had been repeated and another two were missing. So I stood up ready to sing While Shepherds Watched Their Flocks By Night only for everyone else to launch into Silent Night! Only me!! But as I was saying, I’m not religious at all, for reasons I won’t go into now but mainly because of the position of women in all major religions and as far as I’m concerned it’s one fairy story trying to outdo another fairy story, but I enjoy singing carols. I think it’s the tradition that I like. And now, more than ever, it’s important that we keep UK traditions alive.
Christmas Eve was spent with the Daughter, in our jamas, curled up on the sofa, pigging out on seafood and drinking Crabbie’s Alcoholic Ginger Beer. Lovely evening! And then, on Christmas Morning we set off for Clacton, where the Sister had Santa’s Grotto waiting for us. She’d done a fabulous job on her ‘extension’ in the garden. We had a super day, with the Brother and the Nephews. We played games that brought us to the verge of tears, we laughed so much and it was simply lovely spending time together.
Father Christmas was very generous – my presents were all brilliant and I send grateful thanks to everyone for them. My mate J got me an Idris calendar, so I’ll be able to spend every single day of 2016 with him! 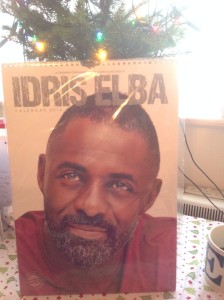 I’ll be looking at Idris every day throughout 2016!

I’ve caught up with Christmas TV. I’m loving Dickensian – it’s fabulous, especially Pauline Collins, it’s like a Victorian EastEnders. And tonight is the final episode of And Then There Were None, which has been compulsive viewing due to the presence of Aidan Turner in the cast!

My eating has been appalling. I have lunch out tomorrow, which I’m pledging now, will be a healthy meal. And then, some sensible eating after that.

And some writing. I so admire writers who have gone through the Christmas period without stopping writing. I seem to have lost my writing mojo, although, to be fair to myself, today was spent working on my self-assessment tax return. Boo boo!! I know that I must carry on and so I have to be ruthless with myself from now on.

If I am a writer then I must write. It’s as simple as that. Yes, I wrote a Valentine’s Novela (Weak at the Knees) and a second book of short stories (Holiday Reads 2) earlier this year, but I am disappointed with myself that I haven’t finished The Banjo. But instead of being disappointed, I shall get my nose to the keyboard and crack on!