For a while now I’ve had a few nasty little things appearing on my skin, the almost inevitable outcome of a fair, English skin spending a long time in sunny climes. Last August my GP sent me to Queen’s Hospital to see the dermatologist who organised a biopsy, which found it was a BCC, also known as a rodent ulcer, and said I’d be called to have it removed. By the time I left at the end of February, I was still waiting, a probable casualty of the series of junior doctor strikes.

Anyway, once here, I went to see a doctor who said that the biopsy had taken so much of it it was hardly worth removing the remainder and so we’d keep an eye on it. I was happy with that. He also confirmed that the lump on my forehead looked like one, too, and needed to come out – it was a biggie! At one point I thought I might be morphing into the cow with the crumpled horn!

So yesterday, I went back to see Dr Charles. I was a very, very, brave girl. Those who know me well will confirm I have the lowest pain threshold known to Mankind. Even the Daughter knew it when she was in the womb, bless her, and deliberately presented herself in breech position, which meant I had to have an epidural. And having experienced labour pains for just fifteen minutes, until the injection took, I am eternally grateful for that. But I digress….

I managed to lie very still while the anaesthetic was administered. Oooouch! Felt that! But after that, I didn’t feel a thing. The only thing I didn’t like was the smell of burning as he cauterised the blood vessels. The hardest thing is keeping it dry; I sweat so much always so am having to mop my brow continually, like some latter day Pavarotti. I just hope it doesn’t spoil my good looks in any way. I am praying the scar won’t resemble (yet another) frown line.

And after being so brave I thought I deserved a little treat so last night I went to one of my favourite places, C&C Wine Bar, for a lovely bit of grub. 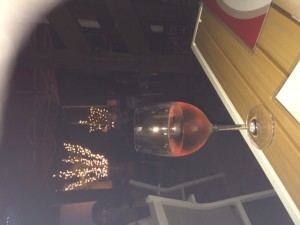 The terrace at C&C Wine Bar

I had the Babotie Rolls and then Coconut Shrimp. All washed down with my favourite dry rose. Delicious!!

And now, it’s back to editing The Banjo. I am going cross-eyed!!! Message to the Universe: I can afford to pay to have my next book professionally edited and proof read. Thank you