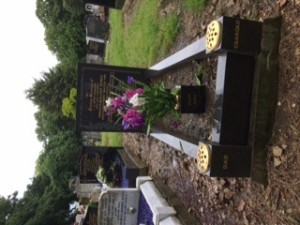 Some beautiful English summer flowers for my parents,

And then, it was back to Gatwick, courtesy of the lovely AK, who drove me, where I left yesterday morning to come back to Antigua. I was extremely lucky to be upgraded to Club World on the flight. The section of the Club World cabin I was in only had three other people, so I actually had a loo to myself. Now, that really IS an upgrade. And I am extremely grateful fo it.
And I’m extremely grateful that I had such a lovely time, even though it was whirlwind and tiring, I wouldn’t have changed it. It was amazing being able to spend time with people I love.
Tonight I’m going to the launch of Hub Dot here in Antigua and tomorrow night to Shiva’s Academy of Dance show to support my friend MA.
And then it really is nose-to-the-grindstone. Writing every morning, until Singles, Ahoy! is finished!

3 thoughts on “My Little Grand Tour”