So, I’m starting off 2017 with a HUGE apology for being so absent at the end of last year and the beginning of this one. A very belated

The couple of weeks before I left Antigua to spend Christmas and New Year in England just flew by and with the best will in the world I couldn’t find much time to update you all on my activities. Enough to say, I finally published SINGLES AT SEA – Hooray! Hooray! And it’s available on Kindle only at the moment – sorry but it will be out in paperback very soon. Meanwhile, if you’re a Kindle fan you can read it here: https://www.amazon.co.uk/Singles-At-Sea-Book-ebook/dp/B01N9MZSH4/ref=sr_1_1?s=digital-text&ie=UTF8&qid=1483899445&sr=1-1&keywords=Singles+at+sea  And if you do read it a review on Amazon is always very very welcome. I thank you!

So that was all very exciting! What’s also been exciting was doing the research for THE BANJO (Book Two). While I was back I went into Valence House to meet Linda who has been kindly helping me. What a fabulous set of resources they have! A wonderful place and being there brought back so many memories as it stands in Valence Park where I used to spend the summer holidays as a young teenager. https://www.lbbd.gov.uk/residents/leisure-libraries-and-museums/valence-house/visitor-information-and-opening-times/opening-times/

Words can’t describe how lovely it was spending the Christmas Season with friends and family. We had a smashing Family Christmas Dinner on the evening of 22nd, at the Pig and Whistle in Chignall Smealey, courtesy of the extremely generous Brother. I had a couple of lunches and laughs with dear old friends and a super Christmas Eve lunch with the Sister and three Cousins. Christmas Day was spent with the Sister and the Daughter joined us on Boxing Day. Father Christmas was very generous but that was mainly because I was a very good girl last year!

I claimed a bed with M in Upminster and J in Dunstable as well as with the Sister and thoroughly enjoyed my time with them.

And on New Year’s Day we had another family gathering as my dear Aunt Joan was ninety. 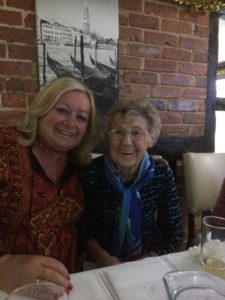 With Aunt Joan on her 90th birthday

I can’t believe it. She’s got so much energy and is as sharp as a pin. Apparently her secret is Bailey’s! I must try it 😉. We had a great time helping her celebrate.

The only downside was being unwell. I’d skipped onto the plane at VC Bird but by the time we landed at Gatwick eight hours later I had the most awful cough and cold! I spent the whole two weeks sniffing, snorting and coughing. Good job I take my little yellow pills or I’d have had to take to my bed – or rather someone else’s – to recover.

And the other downside was that it passed all too quickly. No sooner I was arriving the Daughter was dropping me off at the Premier Inn, Gatwick ready to come back. I seemed to spend so little time with her, too 😥😥😥.

The return flight was full to bursting so I was very, very fortunate to be upgraded to Club, which made for  a very comfortable journey indeed!

Back in Antigua I’ve sort of hit the ground running. I worked on Friday taking a group of Americans from a cruise ship on a tour, which went well. And as I was standing at the entrance to Nelson’s Dockyard waiting for my group to come out I found myself face-to-face with a woman who I last saw thirty years ago. I taught her English as a 13-year-old in Ibiza and her beautiful mum was the best dress-maker I’ve ever known. She made me several outfits including my wedding suit and her clothes always fitted beautifully. The amazing thing was that Celia, her daughter, and I recognised each other! She was with her handsome husband and three beautiful kids. We were only able to speak for a couple of minutes – and we talked ten to the dozen – but have promised to keep in touch. I’ve got trips to Ibiza planned and will definitely look her up. But what a small world! I was so thrilled to see her and went all the way back to St John’s with a huge smile on my face.