Oh, yes!
If ginger were a man I’d want to marry him and have his babies! I am hopelessly, madly, deeply, drunkenly in luuurve with ginger; with the look of it, the feel of it, the taste of it and the smell of it. I find myself sneaking a peek at it and then reaching out to touch it and then inhaling its rich, uniqueness. I add it to just about everything – especially smoothies: banana, papaya, coconut water and ginger. Heaven in a glass! This could be the end of my lifelong love affair with chocolate…

It’s been a busy couple of weeks. I wish I could say that it’s been busy with writing – although I have made some headway – but I find that even though I’m only working 2-3 days a week it’s really eating into my time, which I’m not complaining about, after all I need to earn to eat and besides I’m enjoying myself.

The passengers from the cruise ships are such a mixed bunch of people – all nationalities, social types, physical types. I work with a lot of Spanish-speakers, not just from Spain but from Latin American countries and other Caribbean Islands. I love the banter and the questions and the enthusiasm of the Spaniards, though, and their comments about their ship! They make me laugh and I enjoy their company. I’ve worked with quite a few Americans and Canadians, too, including a peanut-farmer from Georgia and a man with a huge cattle farm I can’t remember where.

But I’ve also done a few private trips with wheelchair passengers on what is called ‘the Adapted Tour’. On this I am accompanied by the wonderful Bernard, himself an amputee, who drives a specially adapted vehicle that takes two wheelchairs at a time. These trips have been humbling, especially the first one when I went with two men, both stroke victims, one of whom had suffered his stroke at just forty years old. Their zest for life and determination not to miss out on anything left me speechless, as did the love and devotion of both their wives. Here were two slight women who pushed wheelchairs over cobblestones and grass, who took selfies with their husbands, and gave them drinks and took them to the toilet and talked to them and held their hands and never stopped smiling. And their gratitude to Bernard and me was overwhelming, yet it should have been us who were thanking them – and we did! – because I learned a lesson in gratitude. I came home and wrote three pages of things I should be and am grateful for. It was eye-opening and life/the Universe was rubbing my face in the fact that I have NOTHING to complain about.

On Friday I went to an Antiguan wedding! Well, the bride was Jamaican and the groom Canadian and it was a real melting pot of guests who were Antiguan born and those from the four corners of the earth. The bride looked stunning: 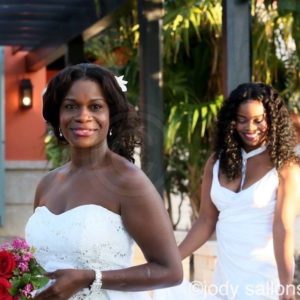 It was a beautiful occasion and I was thrilled to be a part of it. And I have a second wedding to go to next Saturday. *signs off singing “Love is in the Air.” 🎶❤️🥂💍