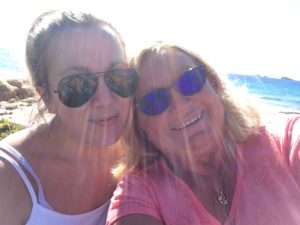 What a wonderful week it was when the Daughter settled into her new life on Ibiza. This photo was taken at Cala Conta on a beautiful, sunny Sunday afternoon. We’d had a lovely weekend exploring all corners and coasts of the White Island as the Daughter refreshed her knowledge of the place where she spent her early childhood; where she’s chosen to settle down.

I was full of admiration for her, the way she hit the ground running, starting her new job just fifteen hours after our plane touched down. She’s taken to it all like a duck to water and appears tan feliz como un perdiz (As happy as a partridge) as the Spanish say. Her short drive to work through the Ibicencan countryside leads to a walk alongside the Port in Ibiza before she reaches her large, airy office bang in the centre of the city. 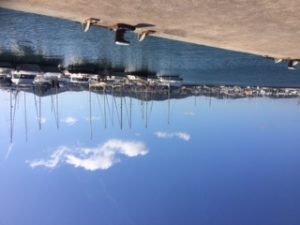 Stroll to the office…

Our weekend was wonderful. We visited some great places, including Aubergine, a litle gem near San Miguel. 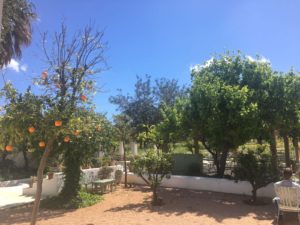 Aubergine – a little gem of a restaurant

We went to Cala Bassa Beach Club. It’s a fabulous place but don’t have the chicken curry. The Daughter and the Prima had amazing meals, though, and the (3!) Irish coffees more than made up for it. 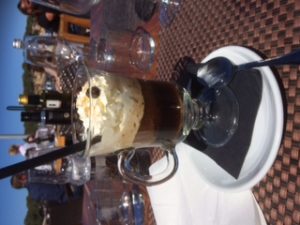 Irish Coffee. It would have been rude not to.

We had outstanding tapas at Tapas, which used to be Es Reguero – where the Daughter cut her head open on a swing when she was three.

And we also found ourselves at Es Cavallet having a sundowner at La Escollera – another great place- and as you can see we look happy. 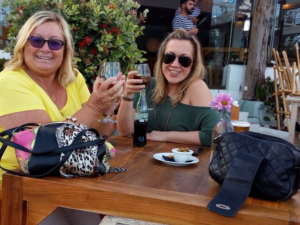 As happy as two partridges

So, I left my darling with very mixed emotions; pride at how quickly she’s settled in; satisfaction and happiness at seeing my kid so happy; sadness at leaving her. After a traumatic time here, which I’ll blog about later this week, I’m leaving this island, GB, to return to the third island in my life, my beloved Antigua.

What is it about islands that make them so appealing? I think they appeal to a deep desire for peace, solitude, closeness to Nature, and the lure of the Robinson Crusoe image of sun, sea and sand. Whatever it is, I’m glad I’ve got it and that the Daughter has, too.