Every time I turned on the TV or radio a couple of weeks back it was to hear praise of our NHS on its 70th birthday.  I think the NHS is brilliant. We pay for it without noticing and it’s always there when we need it; much better than any insurance cover.  I can’t imagine what it must be like to have to save up or go without food or other essentials  in order to pay to see a doctor. I do think it needs a serious overhaul and that huge holes that leak money, such as the millions spent on interpreters, some cosmetic procedures, treating those who have never paid in, need to be repaired but on the whole, I like it!

So, having recently moved back to Dagenham I decided I had to enroll with a local GP.  Unfortunately, in the years I have been away my brilliant Doctor Kumar – the kindest, best GP I ever had – retired and the practice closed. So, I Googled ‘GPs in Dagenham East’ and was delighted to find one just a couple of streets away.  I got an application form, filled it in, grabbed my ID and went to sort out my application.

In line with the demographic changes in Dagenham over the last fifteen years, the receptionist was Eastern European.  I explained why I was there.

”Where do you live?” I was unsure whether her tone, which was slightly softer than a Regimental Sergeant Major, was due to lack of training, courtesy or linguistic skills, ”You in our catchment area?”

I gave her my address. She didn’t know where it was so I explained. She slowly nodded. I pushed my documents towards her. She thrust them back at me.

And I know this how?  There’s nothing on the surgery’s website about a specific time.

So, I shrugged and went back the following day at the designated hour.

This time the receptionist was English so no lack of linguistic skills.  It soon became obvious she had been trained at the Colditz School of Charm and Customer Service.

She asked where I lived and reluctantly agreed I was in the catchment area.

”Have you brought ID and proof of address.”

I produced my driving licence.

“But I was told to bring photographic ID and proof of address,” I protested.  “My driving licence shows both.”

“It doesn’t say that on your website, or application form…”

“And a letter with your address on. Like council tax,” she continued.

”Then you’ll have to ask them to send you a letter.”

And with that she turned back to her computer screen.

Fast forward a week and it’s this morning. Armed with application form, passport, Council Tax Demand from the London Borough of Barking and Dagenham I re-entered the arena.  A sign indicated I should wait beside it until called forward.  The English receptionist was once again staring at her computer screen. I waited a couple of minutes; not even an acknowledgement. I jangled my keys. Nothing. I coughed. Nothing.  She sipped her coffee and shuffled some papers.

She froze, obviously shocked and affronted someone would call out a greeting when they have been instructed to stand and wait. Slowly her eyes swivelled round and stared at me. I stared back.

Her hand reached towards me for the form, I assumed, while her eyes returned to the screen.  I placed the form into her outstretched hand where it remained for several, long moments while she studied the screen and then she began to look at it.

The form was slapped on the counter.

”You’ll have to get it from your present surgery,”

”Can’t we add it when they send my records over?” I ventured.

From her expression that would be a hanging offence.

She turned back to her computer and coffee, thus dismissing me.

I will admit to growling as I marched out.

I rang my present GP to be told by the automated phone system I was sixth in the queue. I hung up.  Life’s too short, quite frankly.  I shall try again later.

And then go back tomorrow and hope it’s fourth time lucky. 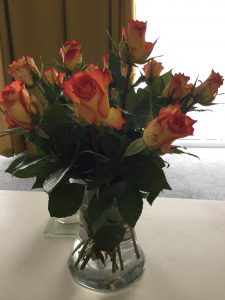 Beautiful roses. With love from Me to Me.

To cheer myself up I went and stood in the freezer aisle at Tesco. Air-conditioned heaven!  And then I bought myself some gorgeous roses.

Because I’m worth it!

4 thoughts on “Our ‘Wonderful’ NHS”