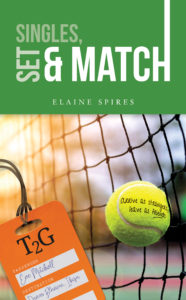 At the moment it’s with an army of book bloggers who have kindly agreed to take part in my blog tour, which has been organised by the fabulous Rachel Gilbey (and who I’ve driven nuts!).  And that’s exciting and frightening at the same time.  Eeek!  Crossing all fingers and toes they’ll like it.  The paperback version will be available from mid-July onwards, too.  And I have a further announcement for those of you who prefer a proper book……. by the end of July the whole Singles’ Series will be available in paperback, too, closely followed by The Banjo. Hooray!

I was so excited about the cover reveal and Twitter and Facebook were going so crazy I couldn’t keep up and then my cousin J came round.  It’s always lovely to see my cousins and J is a lovely person with a great sense of humour.  We spent the whole time laughing and just before she was leaving she went to the loo and I had a quick check of my emails.  There was one from Jonathan at Dan Films saying that the short I co-wrote, Only the Lonely, had been shown at Cannes as part of THAT Film Festival’s showcase and was one of five selected (from more than sixty) to go into the Final in February.  Apparently the film was part of the showcase because it won the Groucho Short Film Festival. J came back from the loo to find me dancing around the kitchen! I spent the rest of the day with a HUGE grin on my face – like the cat that got the cream – and pinching myself to check I was awake!  It’s a huge confidence boost (I spend my life doubting myself; I think I suffer from Imposters Syndrome) and has spurred me on to continue writing film scripts.

So, yes, I was a little bit in love with last Tuesday.

And Stanley Grimshaw Has Left The Building went very well at the Bridewell Theatre Lunchbox, thank you for asking.

I just wish all this creativity was making me some serious money. I have to keep on practising positivity as Anna Scher taught me.  And meanwhile, I’m enjoying myself doing things I love.