Well, what a whistlestop trip it was!  On Wednesday lunchtime I left Stansted to fly to Ibiza on business, stayed over night and came back Thursday evening.

There was a gasp and a sharp intake of breath from the Daughter when I said I was flying Ryanair.  “Are you mad?” She asked me.  What a way to speak to your mother!  But she had a terrible ordeal at Ryanair’s hands a couple of years ago and vowed never to travel with them again, and she hasn’t.  I was very apprehensive, especially as my Because-I’m-Worth-It philosophy has meant that I haven’t travelled economy yet alone on a cheapo airline for yonks.  However, the alternative was BA at three and a half times the price, so Ryanair it was!

Because you can take up to 10kilos in the cabin Stansted was full of Italians strolling around trying to create La Bella Figura while talking loudly on their mobiles and dragging large carry-on cases on wheels behind them, indifferent to whom they may be tripping up. I lost cound of the times I nearly went head over heels.  And how many babies and buggies can you get on a 737?  Dear God!  If I had my way things would be made harder for people to travel with kids not easier!  The decibels of babywail were off the scale.  Although Ryanair allow you to book a seat they still offer priority boarding and I wondered why until I realised that there’s so much hand luggage the chances of putting your bag above your own head are slim unless you are first on or the plane is almost empty.  So outbound my bag was stored four rows behind me, whereas coming back it was in my own little space above seat 6C.

The flight out was a cacophony of noise and a continual interruptions.  First of all from the woman in the window seat.  If you’ve got a weak bladder why put yourself on the inside?  Three times to the toilet in two hours ten minutes?  And then the crew announcements in various degrees of unsure English.  Gone are the days when a Ryanair flight was accompanied by a lovely Irish lilt.  The girl on the return flight could have been speaking in anything when the seat belt sign went on.  Don’t cabin crew have to pass a language fluency test?  She struggled to understand “Can I have some ice in the drink please?”  God help ys if there’d been an emergency.  It was an assault to the eardrums; offering food (not like any food I’d ever seen or smelt – and at €6 a time!); then drinks; then gifts; then scratch cards; then bus and rail tickets into London and finally asking us to tidy up as they have just a 35minute turn-around.  I kid you not.  But then, I suppose, I paid less then it costs me to go and visit my friend in Liverpool on the train.  No-frills.  Yes, it was that alright.

It was the first time I’d been in Ibiza since 2000, something I find unbelieveable.  I mean, I know I haven’t been for a few years but if you’d have pushed me I’d have said “about six” never imagining it’s been fourteen years since I last set foot on what was once my own little Paradise.  There was a time, of course, when I couldn’t ever have envisaged not living on Ibiza.  But times change, your life changes, your circumstances change, you see things differently and, well, I haven’t lived on Ibiza for a long, long time.

Of course, since my last visit much has changed yet much remains the same.  Biggest changes were the deaths of people I’d known and loved, like dear Tony, who was the barman in the Gran Sol and then for years was known as Tony de la Bohemia, la Bohemia being the bar he ran in Es Calo.  RIP, my old friend.  It was lovely to see the Spanish nieces and nephews, too.  And to eat tapas in El Rinco de Pepe on Wednesday evening 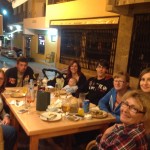 The Spanish nieces and nephews

and then paella by the beach in glorious sunshine washed down with sangria yesterday, before making my way back to the airport.

And in Stansted it was pouring.  And lovely Mr G who kindly came to pick me up got lost, even though he’d worked there for eighteen months!

Now back to the keyboard to plough on with Single All the Way, book three in the Singles’ Trilogy, which is beginning to take shape nicely.  And all over the weekend, Sweet Lady will be FREE as a Kindle download.  🙂