Getting Em’s car ready (Maisie had to supervise!) 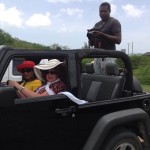 What an exciting week it’s been!  After two years of planning we are finally shooting the pilot episode of the Amazing Adventures of Maisie and Em.  Heather Doram and I went onto ABS Television’s  breakfast programme, good Morning Antigua and Barbuda on Thursday as our characters.  It was a lot of fun as Maisie and Em flirted mercilessly with presenter   William Dorsett, who was a good sport and gave co-presenter the lovely Brucella Marsh a lot to deal with.  We then had a production meeting and ran our lines together Nd then with the producer and director and this morning – 1st June 2014 – the cameras started rolling!

Of course, it wasn’t all smooth sailing!  We were let down by THREE different people who had promised us the use of a convertible; two of them not even bothering to inform us they wouldn’t be turning up!  Fortunately, Heather’s daughter, the lovely Tarryn Doram, brought her jeep for us to use and it worked out wonderfully well, although it was a bit hair-raising actually driving the jeep erratically, while delivering the lines and mindful that there were two cameramen in the back – Anderson Andre and Lawson Lewis (who bears more than a passing resemblance to Idris, Kim Nash!!) that we didn’t want to fall out!

Another early call tomorrow, so final lines learning tonight and early to bed!  I’ll be taking pictures of the shoot and posting them all for you to see.

I was up extra-early this morning, not just for filming, but to watch the French Open; Paris is six hours ahead.  I wanted to see Andy Murray go through to the round of 16, which he did, but Andy being Andy, he didn’t make it easy for himself!  Yesterday I watched a cracking match. Kvitova v Kuznetzova.  The latter won but it could have gone either way.  Great match!  It’s become anyone’s tournament in the women’s draw as the top 4 seeds are out.  I don’t mind who wins as long as it’s not Sharapova. I can’t stand all that screaming.  In the men’s draw, Rafa’s my favourite, of course, followed by Murray and then Tsonga; anyone but Federer!

The Antiguan writer Joanne C. Hillhouse called by on Friday.  We had a fabulous afternoon putting the world to rights.  We discussed so much, including immigration in UK and in Antigua and discovered very similar situations.  Joanne is such a bright, intelligent woman with a wicked sense of humour and it was great to spend some time with her.  Four hours passed in the twinkling of an eye, but as she later posted on FB, at Avocado Cottage you go into timelessness!

Like most of the civilised world I was sad to hear of the death of Maya Angelou but pleased to hear of the stay of execution in Sudan of the woman who married a Christian.  Why isn’t our government threatening to withdraw aid to Sudan until she’s freed?  Why aren’t other Islamic countries protesting?  I despair of humanity sometimes.  Also sad to see Stephen Sutton’s funeral, yet it was also nice in a strange sort of way.  Can’t believe how sick some people are, writing vile things about him.  How sick must you be to troll someone as magnificent as Stephen?

Great news from UK.  A friend of the Daughter’s, Andrew, is in Jack Pack and they got through to the final of Britain’s Got Talent.  They are great and deserve to win over sob-story singers and grannies being thrown around by foreign dancers.

The election vans continue to disturb my peace every day, the water’s on and off – good job I have a huge reserve tank – the weather’s good and apart from that, not much has happened really! 🙂

3 thoughts on “The Amazing Adventures of Maisie and Em – ACTION!”