It was the loveliest week imaginable, the one I recently spent with The Daughter on Ibiza. It was lovely on so many levels, too.

I was chuffed to see her back in the place of her early years and to see that she fits in totally. You can’t deny your roots, at least she certainly can’t. She is unmistakably Spanish. Her use of the language improved by the day and everyone was keen to ask her about her background. The head-waiter in our hotel asked if she was Latin-American, which, given that her father is Uruguayan, she is, saying she not only looks it but that he could detect a lilt of accent when she spoke. But for me, her mum, it was fascinating to see her morph back into her Spanish self, hands going like the clappers, hair flicking, eyes flashing!

We stayed in Es Canar as the Daughter doesn’t know that side of the island at all and she thought I might not like the noise and disturbances of Sant Antoni. So we booked into the Hotel Panorama. I remember it being a tiny little village with about four hotels the last time I was there. The hotel wasn’t bad; not exactly our cup of tea as a Thomson Gold hotel but we took what we wanted and left the rest. We were able to find sun-beds far enough away from the entertainments so as not to be really disturbed by it and I took solace in the thought that at least it wasn’t a family hotel – it was adults only!! – so there was no kiddie club to contend with. But we didn’t spend much time in the hotel a we hired a car, a gorgeous Fiat 500 convertible and went off sightseeing and exploring.

Our first port of call was the Hippy Market in Punta Arabi, just a few minutes away from our hotel. It’s much larger now than it used to be and like so many markets lots of stalls sell the same thing. But it was great fun – especially seeing some of the original hippies. The Daughter bought a beautiful turquoise mini-dress which suited her down to the ground and I got a lovely, bright sarong for €5.

Taking The Daughter to the church in Sant Rafel where she was baptised was quite emotional. Yes, I know what you’re all saying, ‘But you don’t do religion, Elaine!’ But those were different times. And seeing the church, being able to go inside it and look round and take photos meant a lot to her. Finding it was hard, which seems unbelievable. I mean, Sant Rafel is a tiny little village, or at least it used to be! It’s now got an underpass and new roads and a huge Repsol petrol station, which we drove past about six times before going in and asking for directions to the church, which was only a hundred yards away! It’s now up a narrow road with houses either side whereas it used to be on the main road.

The Daughter is a member of a supper club, which reviews restaurants and so we went to several places she had ear-marked, among them El Chirringuito at Cala Gracioleta. Beautiful food but such a shame the sea was a bit mucky. We also went to STK, in the Hotel Corso in the Marina Botafoch which was very expensive, in my honest opinion, but once again, the food was excellent and the service, from very handsome waiters with their man-buns and heavy stubble, was superb. I later found out that the owner of the Corso is someone I worked with years ago who is now a multi-millionaire!
Visiting San Antonio was a must and the moment I walked into the Hotel Gran Sol I wished we’d been staying there. It was such a flying visit, but still great to see Anne and Pepe and Rosa and Vicente and also to see that the hotel is now a well-deserved three star; it was always the best two-star hotel I ever knew. It was sad to hear, though, that so many people had passed on, among them Don Vicente and Don Pepe, the owners of the Gran Sol who made me so welcome when it was my home for three years, and also Adelina, the sweetest woman and best dress-maker ever!

Time was spent, of course, with the family and that was just amazing to see The Daughter with her uncle and cousins as they all love her to distraction. We had two special moments, too. The Daughter is a great believer in white feathers being a sign of loved ones who have passed on, and we were eating paella at the Pinet Playa with her cousin M and talking about my mum and her beloved aunt, who passed away three years ago, when a white feather appeared next to me. That night, eating (again!) tapas in the Port of Sant Antoni, she bent down to pick up her handbag, only to see another white feather lying next to it!

We had a gorgeous day out on the excursion to Formentera. We got drenched on the boat going over, but were dry by the time we got onto the coach, and really enjoyed the short sightseeing trip and our time on the beach. Interestingly, the guides were two men I remembered from my days as a rep, still doing excursions, still looking good, Pepe and Guillermo!

I was taken to Cafe Mambo, by The Daughter as it’s one of her favourite places in Sant Antoni. Sunset Strip used to be just the rocks and the sea in the days I had La Chinita, which is now, sadly, a storeroom for the supermarket next-door and a kebab stall. What a shame! That made me sad. I loved Sunset Strip, though, and the fabulous seaside promenade that it forms part of going from Cala Gracio right round the town as far as the hotel Hawaii, even if we did nearly get mowed down by large groups of men on Segways! It was interesting chatting to our waitress, too; an English woman who teaches ESOL in Barcelona but who wanted to do a season on Ibiza. And who can blame her?

We also did Posh Day. We had lunch in Pikes, or Ibiza Rocks House as it’s now called. I remember when it opened, my friend Maggie made all the curtains and soft-furnishings for it. It’s a gorgeous little gem of a place which I loved and somewhere I’d like to stay, with great staff – we had a zany Italian waitress – and fabulous food, and where we mixed with The Famous! Yes! The dizzy heights of C-List celebs lunching on the next table! The only thing that I found disappointing, though, was the number of British families there; lots of children, where I had imagined Beautiful People! Well worth a visit, though!

From there we went to Es Vive in Figueretes. Now, I have to declare an interest here as a cousin of mine is a sleeping partner. But……..it is GORGEOUS! It’s just won a design award and it’s not surprising. It is the most beautiful, tasteful, Art-Deco building. It’s so exclusive, we couldn’t find the way in! Having gone round the block twice, we finally realised that a discrete, white wooden gate in the wall was the entrance to the hotel. There was a buzzer on the wall, but just then two people came out so we slipped in and had a cocktail on the terrace. Oh, yes! Wonderful!

Then we went back over to the East Coast to ME, which belongs to the Melia Group and is halfway between Santa Eularia and Es Canar. Right next to it is Nikki Beach, a place I’d heard of. I asked The Daughter if we were going in. “No,” she said, giving me a look. “It’s a bit wanky.” (No. Me either.) But ME was another gorgeously glamorous place in a beautiful setting. We had a drink in their Oyster Bar, which is next to the infinity pool and it was just perfect.

It was great to see, that in spite of the ‘spoiling’ of Ibiza by mass tourism over the last thirty-five years or so, it’s still possible to find the Ibiza of free-spirits and at-one-with-Nature. And to enjoy a drink in classy, glamorous spots while watching the world go by. I was also fascinated to hear that nobody spoke to us using Usted/Ustedes the polite form of Spanish, but rather they used Tu/Vosotras, the familiar form. I couldn’t help wondering if this was particular to Ibiza, which I suspect it is, or whether it’s a general shift in the language throughout the country. 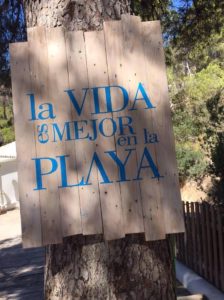 Life is better at the beach.

Our week flew by. We didn’t make it into D’Alt Villa or the Port of Ibiza at all, sadly. We booked it all through the wonderful Rachel Whiteley-Williams of Travel Counsellors and she included the little details that all added ease and comfort to the experience, like a private transfer (in a spanking-new Merc) which meant we didn’t have to clamber onto a coach and do a tour of the island dropping people off before we were finally dropped off ourselves, and a late check-out, so we left the room ten minutes before our car came to take us back to the airport. No sitting round for hours for us!

But the best thing about the holiday was that I got to spend Quality Time with The Daughter. I was reminded at every moment that I love her because I’m her mum, but that I also really like her because she is such a lovely person. She’s kind, considerate, intelligent, wise beyond her years and she’s a right laugh. We seemed to spend the whole time laughing our heads off, apart from when she was yelling at me to stop snoring. Snoring? Moi? How rude! We had a wonderful week together, which was over far too soon. And which served to make me realise just how much I love her and how I miss her like crazy.

6 thoughts on “A Perfect Week”