Well, what a busy couple of weeks!  I can’t believe how long it has been since my last blog and do apologise for keeping you waiting.  How rude am I?  So here is a longer-than-usual blog; a blog with knobs on, as it were.

I was thrilled and excited to be chosen as one of sixty ‘top authors’ for the Clic_Sargent auction.  People can bid to have a character take on their name in my next book, while donating to a very worthy cause – the Sargent Cancer Care for Children –  all at the same time.  I am in exalted writing company and beyond delighted about it.  So – why don’t you go on-line and put your bid in?  And if you don’t want to be in just my book you can bid on other authors, too.   http://www.ebay.co.uk/itm/201296104690

I was also interviewed on Female First – a fabulous on-line magazine for those who are not familiar with it.  I was asked why I write about travel in my novels.  You can read my answers here:  http://www.femalefirst.co.uk/books/elaine-spires-weak-at-the-knees-649339.html   And the whole mag is a great read, too, not just my bit!

I’m busy with my director’s hat on for The Vagina Monologues, which Melabeau Productions is staging at the Brentwood Theatre in May.  Rehearsals have been taking place via Skype, which is amazing.  It makes rehearsing so much easier, especially as the nature of the play – a series of monologues – means that the actors don’t all have to be together for every rehearsal, so using Skype is working very well.  It’s an exciting project that we’re producing with the tagline ‘Vaginas are talking Brentwood is listening’ and I’m very grateful for all the help and co-operation being afforded us by the lovely people at the Brentwood Theatre and those they have introduced us to.  Our cast includes TV veteran Anna Karen, best know as Olive in On the Buses and Aunt Sal in Eastenders, Julie Barker, Feyi Babalola and Theresa Cole.  They are absolutely smashing it and TICKETS ARE ON SALE NOW.  So make sure you book yours as I’m certain you don’t want to miss this one, do you?  http://www.brentwood-theatre.co.uk 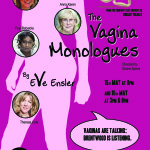 Talking of the theatre, I went to see The Play That Goes Wrong on Sunday with the Sister, three Cousins and an Auntie as a pre-birthday outing.  I found the offer on lastminute.com; it was for lunch in Fire and Stone, Maiden Lane, WC2 followed by seats to see the play for £24 each.  It all seemed a bit too good to be true, but as it was Sunday matinee – a time I particularly like going out, especially to the theatre as I dislike getting home late at night – we thought we’d go ahead and book it, all agreeing that even if the lunch was crap, at least we’d be getting to see a West End play at a cheap price.  But the lunch was far from crap – it was great!  I had the tiger prawn tagliatelle and the others had pizzas the size of wagon wheels – and unusual pizzas at that, not just Four Seasons or Ham and Pineapple.  We were very impressed.  And then when we picked the tickets up at the Box Office of the Duchess Theatre, we found we were in the stalls!  Great seats!

The play is possibly the funniest, certainly the cleverest, I have ever seen.  The cast – all members of the Mischief Theatre Group – must go home black and blue every night with all the physical stuff they do – but their comedy timing and delivery of a belly-laugh script was impeccable.  I’d recommend this to anyone and I’d have paid a lot more just to see it without lunch being thrown in.  Still, gift horse and all that.  The Auntie, who is 87, was squealing with laughter next to me all the way through it.  A fabulous outing with a group of fabulous women.

And I had lunch and a lovely afternoon with another fabulous woman on Monday: the Daughter.  I went over to hers in Surrey and we drove to Shepperton and had a tasty lunch in a delightful pub on the water’s edge before driving to Staines where she did her last minute shopping in preparation for the first of two Holiday-of-a-Lifetimes that she’s going on this year.  It was just great spending some quality time together – like old times – lunching, shopping, laughing – then back to hers for a coffee before I started off on the three trains and a bus journey back to Essex.  I do miss her so much and wish we lived nearer.  But the time we spent together on Monday was really lovely and on Tuesday she set off on a marvellous three-week posh holiday to Thailand.   And when she comes back on 23rd, I’ll be in Antigua, so we won’t see each other again for about six weeks. 🙁   Still, she Skyped me this morning from beside the pool in Bangkok having spent the morning in the Floating Flower Market and yesterday taking tuk-tuk rides to palaces, temples and yummy restaurants.  Sounds like they’re having a ball and I couldn’t be happier for her.  She really deserves it; she works hard, is a beautiful woman inside and out and she has totally picked herself up and got on with the business of living life to the full.  Her second Holiday-of-a-Lifetime will be to Las Vegas in the autumn!    Oh, and did I mention the fortnight in Portugal in the summer? 🙂

And then – if it was Tuesday, it must be Anna Scher!  I had lunch with my dear friend, MBE and all-round amazing woman on Tuesday.  It was lovely to see her again as I haven’t been able to get to classes for a while.  Anna is so well-known in Islington where we met up, that it was rather like having lunch with royalty as there was a constant stream of people to our table coming to acknowledge her, some showbiz and some not.  Anna is always such an entertaining companion but she is so interested in what you have to say as well. and to learn what you’ve been doing and she never fails to ask after the Daughter who was her student for many years.  Their mutual love, respect and adoration for each other continues to this day.  But it was a lovely catch up and we left with a huge hug, both promising not to leave it so long until next time.

And Wednesday meant Birmingham.  I had a business lunch with the rather wonderful and lovely Ms Kim Nash, aka Kim the Bookworm.  Kim is another amazing woman who has worked so hard to help me up my profile and put my name out there in Writers’ World and I am so very grateful to her.  She’s also become a very close friend, and she was my Personal Shopper yesterday, bringing me a selection of tops from the fabulous Hello Beautiful Boutique in her town of Hednesford, which I tried on in the loo before making my selection.  As I’ve said, it was a business meeting, but it would have been rude not to have held it in Turtle Bay (just behind New St Station) and not to have partaken of a couple of Jamaican Mules (ginger beer, rum and lime – OMG!!).  Three and a half hours passed in the twinkling of an eye as we ate, drank, chatted, laughed and worked on my action plan, and then it was time for Kim to get her train back while I met my dear old friend L by the Bull and spent another three and a half hours of laughter, wine, coffees and a little bit of tea (lunch had been so filling!) before getting the 19.30 back to Euston.  Fabulous day!

In between Nick and I have moved forward with some legal stuff that has, unfortunately, become necesssary.  More about that in a couple of weeks.

Sooooooo – not much time for writing!  I’ve given myself a slap on the wrist but I know that my three and a half weeks in Antigua will soon sort that out.  I’ve decided I’m not happy with the next novel; I was finding it difficult to put onto paper what was in my head, but then I realised that I didn’t have to force anything at all as nothing is written in stone, not even the three chapters I’d already written.  So I’ve stripped it all back and now have a skeleton storyline, main characters decided and a couple of twists already in place so the business of writing proper can soon begin.  BUT, I have also decided that as Holiday Reads went so well last summer, that I am going to produce Holiday Reads 2, which will come out in early June, so I’m now starting work on that. And……(drumroll)… the Hot Holidays feature will be coming back to the blog VERY SOON! Watch this space!

Added to which, we have the launch of the Maisie and Em Pilot while I’m in Antigua and I have another (as yet, secret) bit of news on the horizon – so all in all – busy, exciting times.

So, sorry I didn’t blog for a few days. xx

2 thoughts on “Blogpost With Knobs On”