Last Saturday I was thrilled to find myself back in Birmingham for a Bloggers and Authors Get Together organised by the writer and blogger extraordinaire Kim Nash aka Kim The Bookworm, whose second novel, Escape to Giddywell Grange is out now.  It was so good to find myself among so many distinguished writers and bloggers; bookie people – my Tribe! Many I was meeting for the first time, but others are people I love and adore like Shell Baker of bakersnotsosecret.blog 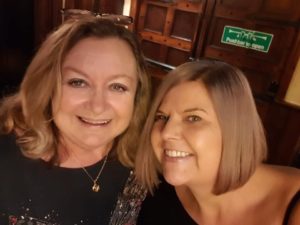 Shell is a dab-hand with the old selfie-stick as you can see.  And she has … Read the rest »

Reviews are an author’s life blood. Our readers can’t imagine the thrill it gives us when they write a review.  Okay – sometimes a one star review sends a writer running to the coffee or something stronger! – but you learn to accept that your work isn’t going to be everyone’s cup of tea.  So it’s a bit galling when Amazon – yes THAT Amazon, the champion of writers and indie authors – won’t let you post a review.  This was the case when I tried to post a review for Kim Nash’s Amazing Grace.

I have to explain that … Read the rest »

I know it’s been a while! Sorry! I have actually been writing. I’ve got on amazingly with THE BANJO. It isn’t finished but it’s coming along nicely. And so many other things have been happening, too. I wake up and ten minutes later The One Show is on.

Last Sunday I went to Birmingham to a Writers and Bloggers Meet Up, organised by the wonderful Kim Nash. It was great to meet so many people that I only ‘know’ from this blog, Twitter or Facebook. I was especially thrilled to meet Barbara Copperthwaite as I’m reading her second book, Flowers … Read the rest »

Life has been quite hectic since I got back – when isn’t it? – and I’ve been here, there and everywhere meeting up with pals and doing nice things, including a lovely coffee-meeting on Saturday with a group of amazing writers, including Miranda Dickinson, Sue Watson, Phillippa Ashley and Cathy Bramley and the two great reviewers Kim Nash and Dawn Crooks.  I sort of felt as if I shouldn’t have been there, but if you’re going to forge ahead yourself and strive for success……stick with the winners!  Great advice and very nice women.

I ventured south of the river to … Read the rest »

Sometimes….most times…or at least often, everything seems to happen at once.  Not that I’m complaining; nothing is worse than nothing going on.  It would be nice, though, if things spread out a bit more. LOL!

And I’ve organised things so badly!  Wimbledon being a week later has really thrown me.  This week I’ve got a meeting at the Brentwood Theatre, wardrobe and rehearsal for pilot TV show I’m involved in (hush hush at the moment), financial stuff, which I HATE!  I have a huge fear of all things financial, including form-filling.  Fortunately, I have someone helping me to do it … Read the rest »

I’ve had a busy few days.  Or rather I had a busy few days earlier in the week; I’ve spent yesterday and today at home trying to rest and relax and give myself a bit of TLC as I fight off joint aches, a sore throat, a thumping head and general not-feeling-well.  But the first half of the week was fabulous.

The rather lovely Annie Burkin featured in Hot Holidays! on 8th June, and that evening her play Selfie Rules had a rehearsed reading at the Theatre Royal, Stratford East.  I went along to see it and left in absolute … Read the rest »

Well, what a busy couple of weeks!  I can’t believe how long it has been since my last blog and do apologise for keeping you waiting.  How rude am I?  So here is a longer-than-usual blog; a blog with knobs on, as it were.

I was thrilled and excited to be chosen as one of sixty ‘top authors’ for the Clic_Sargent auction.  People can bid to have a character take on their name in my next book, while donating to a very worthy cause – the Sargent Cancer Care for Children –  all at the same time.  I am in … Read the rest »

To say I’ve been bombarded with unsolicited e-mails for the last week would be an understatement.  First of all, it was all about Black Friday.  Black Friday?  At first I thought I was misreading and it meant Good Friday, except I’d got my seasons all mixed up.  But no, it was this hideous free-for-all-imported-from-US day when tat or merchandise the stores wanted to shift went ‘on sale’.  I’m sure you saw the pictures and the newsreels which were beyond belief.  Then, these emails continued over the weekend for Cyber Monday, which is an extension of Black Friday but … Read the rest »

So – I’m back in Blighty!  The last few days in Antigua passed in a blur of activity. There was filming; the pilot episode of the Amazing Adventures of Maisie and Em.  We shot right up until 3pm on Sunday and I had to be at the airport for 6!!  Great fun, though, and kudos to all concerned.  So laidback!!  I’ve never been on a shoot where the actors are the first ones there – but hey! – there’s a first time for everything!  And I have to say, that once everyone arrived it all went so well.  Apart from … Read the rest »

Allow me to be ‘political’ to start with today, please.

Over the last few weeks with campaigns such as Stephen’s Story, we’ve seen the power of the hashtag as it was used throughout social media to raise over £3 million for Teenage Cancer.  It was heartwarming to see just how involved people became, moved by the story of Stephen Sutton, and how social media was used for the power of good.  During the last few days another campaign has started up – #bringbackourgirls, which refers to the kidnap in Nigeria of more than 200 schoolgirls by the Islamic fundamentalist group … Read the rest »