I’m taking advantage of dropping anchor on Singles At Sea (see what I did there?) as the laptop is charging to catch up on my journal. Just to explain that my extension lead had ceased to work and the socket is too far from the table for me to write while the laptop’s plugged in. So here I am in the iPad, giving you a quick look at the last week or so.

It’s butterfly season at the moment. Every day dozens of pretty pale yellow butterflies are all over the garden, until I grab the camera and they disappear! They make it look so pretty and I just love them.

It’s also the run-up to Christmas and it’s not just UK that gets stuff in the shops months before, as you can see from my two photos of our local supermarket, Epicurean. 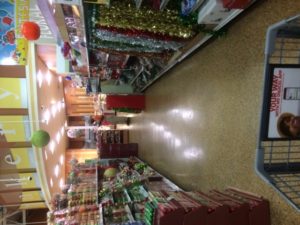 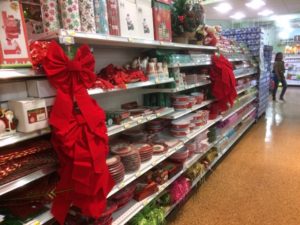 It’s not as if I haven’t spent Christmases in hot climates, because I have, including several here in Antigua. But I found it almost shocking to see the stores filling up with Christmas stuff at the end of September. I must admit, I’m sort of missing Autumn, here. The nights are drawing in; it’s now dark by about 6:15pm but that’s the only change I can see at the moment. I love the colours of Autumn, the golds, yellows, oranges – even brown! Strange, given that my favourite colour is green. And there’s plenty of that in Antigua at the moment. As we come towards the end of the rainy/hurricane season – thankfully unscathed! – everything is rich and green and looks stunningly beautiful against the turquoise sea and the deep-blue sky.

As I’m now mobile – I’m able to get out and about again and really appreciate it all, although some days I just don’t want to leave my lovely Avocado Cottage as I’m so happy hanging around on the veranda. #Iamsuchaluckygirl

I’ve had a couple of nice evenings; a meal out with S to C&C Wine Bar, which was great, and drinks and snacks with B & C. I just love those two and I had a great time with them, especially talking about Brexit with C. He’s a lawyer who studied in England and has an amazing understanding of the whole UK/EU/Brexit situation and it was a pleasure to listen to him and be able to discuss with him in detail.

And I’ve also noticed that since Donald Trump’s “pussygate” men here have suddenly become feminists! It seemed that everywhere I went a few days ago men were discussing what he’d said and without exception were decrying his comments about it just being “locker-room banter”. This has come as a very pleasant surprise as, to be honest, I haven’t found feminism among men – not all men! – to be the case here. Let’s hope Trump’s appalling attitude and insulting, demeaning words have made men all over the globe stop and think about their own attitudes to women. Although given some of the stuff I’ve read on Twitter re the Ched Evans not-guilty verdict, I’m not holding my breath. They are beyond Neanderthals.

The laptop is charged – I’m back on the Viking Queen! Have a great weekend!