I’ve had toothache for several days; one of the big ones right at the back 🙁 and it’s sending a throbbing pain all up my jaw.  Oh, woe is me!!   I have a pain-threshold that is about minus fifteen on a scale of one to ten, so I’ve been taking loads of pain-killers resulting in me floating through the week and seeing the world through a haze.  Finally, this morning I went along to see the dentist only for her to tell me she couldn’t extract it as it’s infected. 😭😭😭 So it’s a week of antibiotics then back next Wednesday to have it taken out.

Mind you, having toothache hasn’t stopped me doing things.  In fact, it’s been quite a hectic time. My friend M and her husband T are staying with me at the moment so I’ve been taking them out and about – which has been lovely, especially as our trip up to Shirley Heights on Sunday resulted in us witnessing the most spectacular sunset in about 25 years. Of course, I didn’t have my camera with me – my Antigua mobile is a little old one which doesn’t take photos – and M needs to download hers onto her computer before she can send them to me. When she does I’ll add them to this post. But it was truly AMAZING!! Pink to orange to purple to red, dark red, darkest red and then deepest black littered with bright, silver stars.  Magic moment!

On Friday the car conked out. I, of course, went into panic mode because, of course I need a vehicle here, but also because all I could see were dollar signs flashing in front of my eyes. It turns out the radiator was leaking along the top. Unfortunately, they didn’t have one so my trusty mechanic Dale has stuck it to get me through the week and will fix it properly next week.

M & T hired a car, which was a big help, but as we were going out to dinner last night the car suddenly filled with shrieks and screams as M and I spotted a frog on the dashboard. We imitated the frog in the leaps we gave as we fled from the car – narrowly avoiding on-coming traffic! T caught it and removed it, only for me to almost sit on another one in the front passenger seat! Cue more screaming and leaping! Bloody things!!!

On Sunday morning my acting career was resurrected – “And about time, too!” I hear you say. I was thrilled to be cast in a short film, Devil’s Dance, produced and directed by the wonderful Zahra Airall. 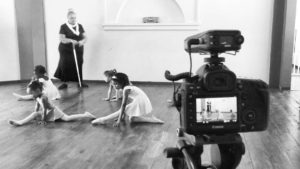 A scene from the shooting of Devil’s Dance.

We had such fun making it with the little girls and I was thrilled to be working alongside the hugely talented Julie Hewlett again. Julie had a lead role in Paradise View, which I wrote several years ago.

As well as acting, I also guided two excursions with Spanish-speaking passengers from the Zenith this week. That was a hoot, as it always is, with one telling me that he’d noticed there seemed to be a lot of black people on Antigua and asking why that was. Had he not realised he was in the Caribbean?? Had he not listened to a word of my commentary?? Did he have no concept of world history or events?? The Spanish excursions are always with lovely people, who are so pleased to have a guide that speaks their language but as usual, the bus was a tip-free zone!

With everything that’s been going on, I don’t even have to tell you that I haven’t done much writing, do I? I’ll be back on it next week. And meanwhile, downloads of Singles At Sea are clicking over nicely. Thank you.